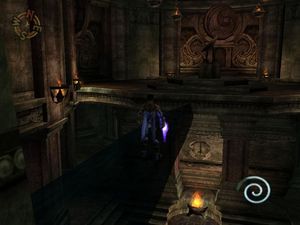 Raziel standing on a Shadow Bridge

Shadow Bridges were bridges that were associated with elemental Darkness and the Dark Reaver. They were apparently composed of shadows that floated in mid-air and were solid enough to be stood on and walked across. The bridges were seen in Soul Reaver 2 and were presumably created by the Ancient vampires.

Shadow bridges were special bridges seen in Soul Reaver 2 that were made by casting a shadow across a chamber at a specific point where apparently magical processes would cause the shadow to become solid and able to be stood on, allowing Raziel to cross to high areas.[SR2]

Raziel first encountered a Shadow Bridge in the 'Reflector room' of the Dark Forge, where he was able to interrupt a beam of light by positioning an obelisk in front of it, and found that the shadow cast was apparently solid and could support his weight, allowing him to cross to the other side of the chamber and continue the large reflector puzzle. [SR2][SR2-C3][1]

Thereafter Shadow bridges could be seen through the rest of the title and were frequently used as a component of puzzles in forge locations, although later Shadow Bridges dd not use objects to cast shadows, instead requiring the Dark Reaver enhancement to activate special Dark plinths or Shadow Bridge activation plates which would spawn shadow bridges for a few seconds, providing access to high areas for a brief period and introducing a timed element to their usage.[SR2][SR2-C4][SR2-C5][SR2-C6][SR2-C7][SR2-C9][1] Dark plinths could be found to spawn shadow bridges in the Subterranean Ruins, Air Forge, Light Forge and were used in those chapters - the plinth in the Subterranean Ruins 'ascending chamber' could be seen submerged in water as early as the chapter Decision at the Pillars, but it could not be used until A Fateful Meeting (it could be used again in On to the Past and Blade of Vengeance).[SR2][SR2-C2][SR2-C4][SR2-C5][SR2-C6][SR2-C7][SR2-C9][1]

Shadow Bridges were only seen in Soul Reaver 2 and were not seen in further titles.[SR2]