The Shield Generator, also known as a Ward Generator, is a piece of Hylden technology, seen in Blood Omen 2. It was a large Ovoid-shaped metallic object, which had several 'spikes' coming from it, which rapidly rotated whilst in use. The object apparently served to create a "magical shield"[1] which isolated the Hylden from general discovery, by preventing teleportation to the Hylden City.

In Chapter 11: The Hylden City, Kain (minus the now deceased Umah ) made it to the Hylden City and infiltrating the complex, he was able to learn of the location of the Hylden Gate and the Shield Generator from two Slaves in the main square of the city.[5] Making his way around the outer buildings, Kain was able to enter the 'shuttle bay' of a Floating vehicle carrying cargo, where he hid himself in the transport headed for the Shield Generator. Once across the other side, Kain emerged, finding the large Shield Generator suspended from the ceiling and protected by the seemingly indestructible the Shield Guardian . Activating several nearby Glyph seals with Telekinesis caused the supports holding up the generator to collapse, dropping the generator on the guardian, burying both in rubble and allowing Janos and Vorador to teleport to the Hylden City.[BO2][6] 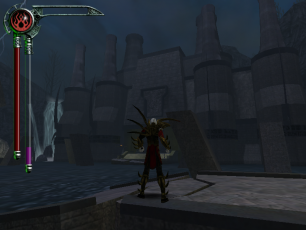 The Building Housing the Shield Generator