"Sustain your strength to prolong your manifestation in the physical world. If you fail to feed, or absorb too many wounds, this fragile matter will dissolve."
―The Elder God[src]

Shifting, also known as Plane Shifting or simply Switching Realms, was the ability of certain beings to willingly manifest within, or traverse between, two or more of Nosgoth's planes, which included the Material Realm, Spectral Realm and Demon Realm. Entities such as demons appeared to be capable of this feat by means of inherent abilities, while others, such as Raziel, used planar portals or other means such as possession. Shifting was a fundamental gameplay mechanic in Legacy of Kain: Soul Reaver, Soul Reaver 2 and Legacy of Kain: Defiance.

Plane Shifting was one of the most crucial and fundamental abilities of the Legacy of Kain series, frequently used by Wraith Raziel throughout Legacy of Kain: Soul Reaver, Soul Reaver 2 and Legacy of Kain: Defiance. Shifting allowed Raziel to travel via a conduit between his native Spectral Realm and the physical Material Realm. Much of the gameplay of the series involved Raziel using this ability to take advantage of the various differing attributes of the two realms.

Shifting was first used in gameplay in Legacy of Kain: Soul Reaver, where it was an innate ability possessed by the Spectral-native wraith Raziel and was hinted to have been gifted to him as a result of his remaking by the Elder God. Pursuing his dispute with Kain, Raziel was encouraged by the Elder to re-enter the Material Realm and stalk his former brethren. In Soul Reaver Raziel was able to cross into the Material Realm by using the Shift Glyph whilst stood upon a Planar portal with a completely filled Health coil - enabling him to "gather matter" and will himself to become manifest. Raziel would than 'appear' from nothing in the Material Realm. To cross to the Spectral Realm Raziel had no such impediments, and could abandon his physical form at any stage without a conduit and he would automatically shift if sufficiently damaged, dissolving his physical manifestation.[SR1][SR1-C1][1][2][3]

Raziel continued to use the Plane Shift mechanic in Soul Reaver 2 with much of the same functions. Raziel could abandon his physical manifestation at any time and would automatically shift into the Spectral Realm when sufficiently damaged. To return to the Material Realm he was required to be at full health and to use the Shift Icon whilst standing upon a Planar portal. As previously switching between realms and taking advantage of their unique attributes was often part of the puzzles of the game, however several enemy variants could now shift between realms themselves, often following Raziel into the spectral realm when he was defeated in the physical world.[SR2][4][5]

By the time of Legacy of Kain: Defiance, Raziel's disobedience of the Elder God meant that "favors" from him, such as Planar portals, were revoked and Raziel was forced to find a new method to switch realms.[DEF-C2] In the Cemetery, Raziel discovered "ethereal gases rising from the moldering corpse" of a Burial site and found that he could project his spirit to Possess the corpse host.[DEF-C4] This ability allowed Raziel to return to the Material Realm and from this point onward Raziel would continue to use the Plane-Shift mechanic, but using burial sites and possession in lieu of planar portals and the Shift Glyph. The new method of shifting carried much of the functionality of the original, allowing Raziel to abandon his physical manifestation at will or when sufficiently damaged; but to return to the Material Realm he needed only to find a burial site and did not require a full Health coil to manifest. The Plane Shifting mechanic in Defiance was now part of Raziel's Reaver menu, allowing him to move between the Realms by selecting the Material or Spectral Reaver for each respective Realm.[DEF][6][7]

Although primarily seen as a gameplay mechanic for Raziel, many other characters and enemies throughout the series have demonstrated the use of similar abilities, and are acknowledged to be able to access other realms, Shift between them or otherwise exist in more than one realm. 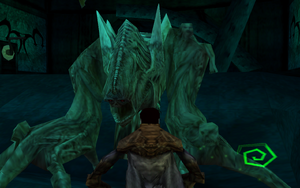 The evolved Melchiah in the Spectral Realm

Of the major characters in the series, at least five have been shown to be able to manifest in both the Spectral and Material Realms, whilst others share partial or similar abilities - with these characters often sharing a link with Death or the Spectral Realm itself. Chief among these is the character of the Elder God, whose control over the Wheel of Fate and spectral plane meant that he existed simultaneously in both realms and locations that were present in both realms frequently showed the Elder in both at the same time.[SR2-C2][SR2-C3][SR2-C5][SR2-C9][DEF-C12] Death Guardian Mortanius was also able to shift realms at will, appearing in Kain's vision of the Underworld in Blood Omen[BO1-C1] and able to be approached in either realm in Defiance.[DEF-C10] As a Specter, former Balance Guardian Ariel could manifest in either realm[SR1][DEF] and was actively shown Shifting between the two in Soul Reaver 2[SR2-C5]. Several of the evolved Vampire clan leaders of Kain's empire were able to reach the Spectral Realm when confronted as bosses in Soul Reaver. Melchiah appeared to retain a link with death and was able to manifest and attack in Spectral, as well as using his Phasing ability.[SR1-C3] Dumah meanwhile was initially encountered whilst impaled with several large Stakes in the Material Realm and his spirit could first be encountered in the Spectral Realm. After removing the stakes, Dumah's spirit re-inhabited his body and he would then be encountered in both realms.[SR1-C8] In addition, Zephon was briefly able to manifest in the Spectral Realm, but would not move or react to Raziel.[SR1-C5]

In the aftermath of the Corruption of the Pillars, the spiritual decline in Nosgoth weakened the barriers between dimensions, allowing several Creature families and enemy classes to shift or change realms, often using the ability to pursue Raziel.[5][7][4] Soul Reaver 2 featured Shade enemies who could manifest in both realms, whilst the Acid, Black, Fire, Gas and Lightning demons could all cross from the Demon Realm into the Spectral or Material Planes at will.[SR2] Both the Shade and Demon families would retain the ability to cross planes in Legacy of Kain: Defiance as Lightning and Fire demons and Greater and Lesser shades were able to cross planes at will. In addition, the Tentacle agents of the Elder God were also able to traverse realms to pursue Raziel.[DEF] 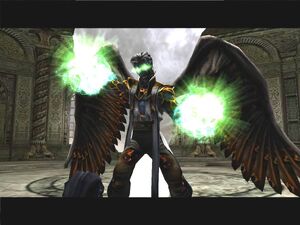 Through the series, several other methods have existed that have allowed realms to be traversed in a more limited fashion:

The Souls of Material Realm lifeforms would be released upon death and would quickly cross over into the Spectral Realm[SR1][SR2][DEF] and eventually consumed by agents of the Elder God to maintain the Wheel of Fate - with it hinted this would lead to rebirth.[SR1-C1][SR2-C3][DEF-C2][7][DEF-C13] The souls of Vampires however could adapt to their spectral existence after death becoming Soul devouring Vampire wraiths; and if the instrument of death was removed they would re-inhabit their corpses in the physical world, becoming dangerous Revived vampires that could drain soul energy.[SR1][SR1-C3][1][2] Though this method of resurrection was only explicitly attributed to the Vampires of the Soul Reaver era, earlier vampire generations may have possessed similar abilities - as hinted by the revival of Janos Audron by restoring the Heart of Darkness[DEF-C12] and the resurrection of Vorador.[8][9]

Though primarily employed by Raziel to cross from the spectral to the physical world, Possession was also used by the Hylden in the Demon Realm to take control of human hosts in the Material Realm. The Cult of Hash'ak'gik was known to be associated with this possession[BO1-C9] and through this the Hylden Lord was able to gain control of Mortanius, using him to murder Ariel and orchestrate the Corruption of the Pillars.[BO1-C1][BO1-C11][DEF-C10] When Raziel began entering the material realm using possession in Defiance, he would regularly be assaulted by Revenants - Hylden possessing the corpses of Humans, Vampires and Hylden respectively; living possessed hosts, the Possessed and the Transformed would also be encountered[DEF][7] and Raziel would eventually be forced to battle the Hylden Lord-possessed Janos Audron.[DEF-C12]

Summoning abilities involved the use of magical methods to call or manifest lifeforms from others realms and typically involved summoning Demons from the Demon Realm. Summoning was first mentioned in Blood Omen: Legacy of Kain, where Dimension Guardian Azimuth had summoned several demon variants to attack the city of Avernus through runes inscribed in Blood. Azimuth would later demonstrate the ability in her boss battle, using it to call Purple ogres from the Demon Realm.[BO1-C8] Legacy of Kain: Defiance would also feature several enemies that were able to summon other lifeforms to do their bidding, most notably among the recurring enemies were the Cenobite summoners who could call Fire demons from the demon realm using their Nether Rift ability - other summoners included the Vampire Conflict Guardian (able to summon Shades), the Vampire Nature Guardain (able to summon Tentacles) and the Hylden Lord Possessed Janos (able to summon Revenants).[DEF][6][5]

Demon sub-races in Soul Reaver 2 were able to manifest in the Material Realm through unspecified means and this was visually distinct from their shifting between the Spectral and Material realms.[SR2] The Demons manifesting in Nosgoth's early history appeared to have been 'sent' to confront Raziel.[SR2-C9] 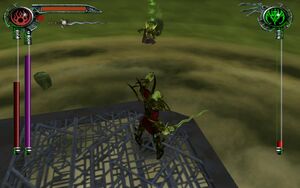 The Hylden Gate to the Demon Realm in Blood Omen 2

Particularly associated with the weakened dimensional barriers in the Blood Omen and Post-Blood Omen eras, dimensional rifts involved a literal 'tear' in the dimensional fabric, allowing direct transit between the realms.[4][5][7] When battling Kain in Legacy of Kain: Defiance, Raziel was able to use his Enhanced telekinesis to blast Kain through a dimensional rift into the Demon Realm[DEF-C12] - though shortly after Kain was able to return through a similar the same portal.[DEF-C13] Perhaps the most significant rift occurred in the aftermath of the Collapse of the Pillars, where the Hylden Lord used Janos to open the stable Hylden Gate to the Demon Realm, allowing the Hylden to cross into the Material Realm.[10][11][BO2-C9][BO2-C11]

The weakening of dimensional boundaries associated with the corruption and collapse of the Pillars was often credited as allowing certain creatures to shift realms more easily and appearances of Demons, Tentacles and Shades in the Material Realm were attributed to this process.[4][5][7]