The Short Axe is a weapon wielded by Kain in Blood Omen 2.[1]

The Short Axe was first seen in the Canyons in the hands of the Female Mercenaries, though it could later be found unattended on the floors of the Eternal Prison, the Device and the Wharves[BO2].

The Short Axe was a smaller version of the Long Axe with which it shared many of its attacks, The Short Axe was much faster and allowed Kain to be more agile than its larger counterpart, but lacked it's more powerful instant-kill grabs[BO2]. 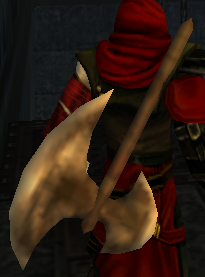 A Short Axe, sheathed on Kain's back

Thegrab attacks of the Short Axe were a face pommel and batting victims across the room. Stealth kills included a decapitation and a standing downward smash[BO2].