Short Swords were a weapon that Raziel could wield in Soul Reaver 2. They were initially found in the hands of Swordsmen Thralls. 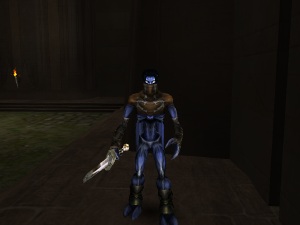 Short Swords were one-handed sword variant weapons; they were slower and more powerful compared to Claws; but were faster and less powerful compared to trident/halberd and axe variant weapons.[SR2][2][1][3] Despite the 'stunted' appearance of these weapons, they had no lesser range than other sword weapons, with all sword variants having the same attributes and move-sets[SR2][1][3].