The Shrine is a notable structure seen briefly in cutscenes in Blood Omen: Legacy of Kain and featured as a playable location in Soul Reaver 2, where it is visited by Raziel in all three eras.

The Shrine was originally featured in Blood Omen: Legacy of Kain, where it was presented as the location of the murder of Ariel and was seen only briefly in the cutscenes. Most notable among its features was a set of balance scales which Ariel appeared to use in the course of her duties.[BO1][BO1-C1]

The Shrine returned in Soul Reaver 2 where it had a differing appearance, with a much grander balance scales-like object dominating the shrine. Raziel would encounter the shrine in all three of the eras he visited, finding it located along a trail that led from the Sarafan Stronghold and Great Southern Lake to the Pillars of Nosgoth, alongside a small stream. The shrine and the surrounding area subtly changed between eras.[SR2] 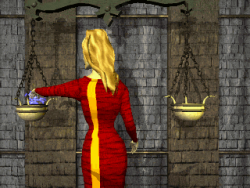 Raziel first entered the Shrine area in the Pre-Blood Omen era at the very end of A Reaver in Time and beginning of Decision at the Pillars. Few enemies inhabited the area and it was largely quiet, though it was decorated liberally with Vampire corpses. After solving the puzzle of the Dark Forge in the Swamp and imbuing the Dark Reaver, Raziel would again pass the structure towards the end of Through the Swamp, on his way to return to the Southern Lake and enter the Light Forge within. This era showed perhaps the most use of the location, with the 'cups' of the structure notably stained and several symbols apparently highlighted.[SR2][SR2-C1][SR2-C2][SR2-C3]

Sent to the Post-Blood Omen era using the Time-streaming chambers of the stronghold, Raziel would once again venture out into Nosgoth in A Fateful Meeting, encountering the structure once more as he followed the trail from the Southern Lake to the Pillars. In this era, the structure was more populated, with several Demon hunters (and the first Demon hunter attack Dogs and Gas demons) nearby, but perhaps seemed to be least utilized in this era, with several of the surrounding features 'ruined' and the shrine itself seemingly abandoned, despite several fires lit around the structure.[SR2][SR2-C5] 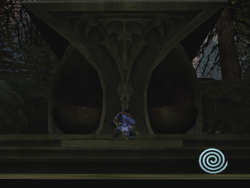 Imbuing the Air Reaver allowed Raziel to open the time-streaming chamber in the Swamp and travel back to Nosgoth's early history in On to the Past. Once Raziel arrived in this era he could travel to the Shrine area at will, but it was initially of limited use as the lake it led to had frozen over, preventing access to the Sarafan Stronghold. After witnessing the murder of Janos Audron at his retreat at the hands of the Sarafan warrior inquisitors (and imbuing the Fire Reaver at the Fire Forge) Raziel pursued the inquisitors back to the stronghold in Blade of Vengeance, once again encountering the shrine as he traveled from the Pillars to the Lake and Sarafan Stronghold. Once again, the Shrine-area was populated, with several Sarafan troops patrolling nearby. The Shrine in this era was much cleaner than in later eras (perhaps suggesting a recent construction) and displayed evidence of usage; though the area was also decorated with Vampire corpses.[SR2][SR2-C7][SR2-C9]

In its first appearance in Blood Omen: Legacy of Kain, the Shrine was unnamed and its location unidentified. With the release of Soul Reaver 2, the appearance of the Shrine area in that game was noted by many fans to be reminiscent of the unidentified location of Ariel's murder in Blood Omen.[BO1][BO1-C1] Soul Reaver 2 Lead Artist Daniel Cabuco later clarified the significance of the structure: "we never officially said it, but I always thought that was where Ariel was murdered. I wanted to put up the decorations similar to Blood Omen's intro, but just didn't have time to implement it."[1] Ariel's usage of the shrine and the Balance scales-like structure dominating the area may suggest that the shrine was dedicated to the principle of Balance and would primarily be used by Balance Guardians. 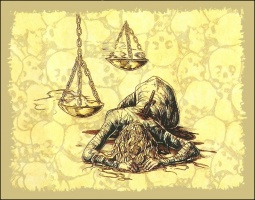 The Shrine and Ariel's death in Blood Omen concept art

Cabuco also explained the subtle differences in decoration between the three eras: "The decor changes because different factions take up residence around it. The Vamp Hunters claim the area for Moebius, and execute vampires there. We had a cinematic along those lines, but we had to cut it for time." - confirming that the structure was used to varying degrees by all of the human 'hunter' factions and that the shrine was specifically used by Moebius's Vampire Hunters as a place to carry out vampire executions in the Pre-Blood Omen era, explaining the numerous corpses around the area and also tying the location to the removed cutscene featuring the murder of the unnamed female vampire at the hands of the vampire hunters.[1][2][3]

In its Blood Omen appearance, the Shrine was depicted as a simply decorated area. Though only seen briefly, the shrine appeared to be surrounded by walls with alternating bands of brown and grey brickwork and two golden trim pieces orientated horizontally at roughly head and waist height. The main focus of the shrine were the balance scales used by Ariel, which were suspended from a metallic lever suspended slightly above human height. The scalepans were a set of bright golden cup-shaped ornaments, with two darker horizontal bands, that hung from the arms of the lever by chains which connected to three minor prongs around the top of the 'cup'.[BO1][BO1-C1]

The Shrine and surrounding area were explored more thoroughly in Soul Reaver 2, with the Shrine itself radically different, appearing as a much larger stone construction in the open air, decorated with metal that made it reminiscent of a set of balance scales. The main structure composed of a 'Y'-shaped stone with a 'T' shaped metallic formation trailing downwards forming the arms and pointer of the scales. Two thin stone arches opened just below the arms encompassing two large stone cups decorated with symbols either side of the main structure. The Shrine itself was raised on a stepped plinth above the floor and set into a rocky outcrop. Though appearing similar to the balance scales of Blood Omen the parts of the Soul Reaver 2 shrine were much heavier, unconnected and unmovable, rendering them unable to be used as scales. Behind the shrine a small cobbled path led a short distance before breaking off in front of an obelisk and waterfall beside a large rock formation. Two trails led away from the obelisk. The first followed the river downstream from the waterfall, crossing over it at a small wooden bridge (with Fire font underneath) before bending away from the river and through a large stone arch formation on the way to the Lake. The second trail led around the rock formation, rising and bending to emerge in an open area at the top of the waterfall. Crossing the river atop the water fall led to a small area with a checkpoint and a Dark font. Upstream the river entered a large open roofed cavern containing a larger waterfall (the source of the water in the Shrine area) and a wooden staircase leading up to a ledge containing an Air font. In most eras a wooden bridge crossed the room to an opening in the rock which leading into a trail heading towards the Pillars of Nosgoth.[SR2] 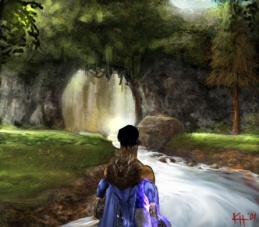 The Shrine area was seen in all three eras visited by Raziel in Soul Reaver 2 with many subtle differences observed between eras. When Raziel first encountered the Shrine in the Pre-Blood Omen era, much of the area was covered in grass and decorated with the banners of the vampire hunters and impaled vampire corpses. The Shrine itself had two impaled corpses on the plinth and several of the features of the shrine appeared highlighted or embossed, with bloodstains apparent on the shrine construction. The trail leading to the Lake was also covered in banners and impaled corpses, with a small decorative pillar placed at the bend of the river. Banners and impaled corpses continued above the waterfall heading upstream, where another small decorative pillar was at the end of the trail leading around the large rock formation. In the cavern, the upper bridge to the pillars was complete in this era, heading straight across the top of the chamber, over the river and waterfall heading into a high cave opening leading to the pillars, itself decorated once again with corpses and banners.[SR2][SR2-C1][SR2-C2][SR2-C3]

In the Post-Blood Omen era grassy verges were replaced by bare rock, with decorative pillars, banners and corpses missing entirely. The Shrine itself appeared duller, with grey replacing previous brown and brass-like coloring of the shrine, and two torches placed on the plinth. The obelisk behind the shrine had toppled allowing access to the top waterfall area, with the second trail blocked by large rocks. In the top cavern, the bridge had fallen in several areas and had to be jumped across.[SR2][SR2-C5] In Nosgoth's early history the grass had been iced-over in many places, with impaled vampire corpses and banners returning (this time of the Sarafan), though less frequently seen than those in the Pre-Blood Omen era, and only one of the decorative pillars present. The Shrine construction appeared much brighter in this era, colored with many light browns golds and whites. The obelisk stood and the second trail was clear, but in the cavern the upper bridge was yet to be completed; with the final crossing missing and requiring the use of an Air plinth to reach the opening leading to the Pillars.[SR2][SR2-C7][SR2-C9]

In the lower shrine area ("Pillars1")

In the upper shrine area ("Pillars2") 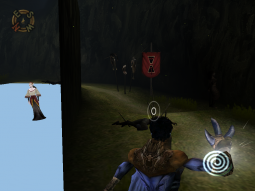 The Female Vampire hidden in walls nearby the Shrine