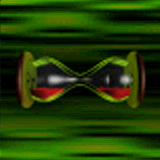 "At times, my magic extends into very exotic disciplines such as the manipulation of time. I am able to slow time down, so I can move about quick as a wolf, while all others move as though they were mired in mud!"
―Kain — Listen (file info)[src]

The Slow Time artifact was a device('s) used by fledgling vampire Kain during the events of Blood Omen. When active all enemies within range would slow down while Kain was free to move around at normal speed.

Slow Time could be acquired from the Spirit Forge hidden in a canyon south of Willendorf.

Slow Time has not been seen or mentioned again following the events of Blood Omen.

Kain refers to Slow Time as though it were a spell rather than an artifact.

The concept of Slow Time was intended to return in Blood Omen 2 as the Dark Gift: Speed. Speed would have originally been the Dark Gift of Sebastian and when active would have allowed Kain to move at one and a half speed while slowing enemies down to half speed. It was replaced by the Dark Gift Berserk.

In Legacy of Kain: Defiance the original Time Guardian used an ability similar to Speed or Slow Time that allowed him to move faster whilst simultaneously slowing time. Later Kain would Acquire the Time Fragment of the Balance Emblem which had similar effects.