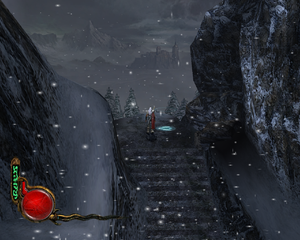 "Even the gentle snowfall can be lethal to a vampire's wellbeing."
―Kain — Listen (file info)[src]

Snow, also known as Snowfall, was a form of weather based around frozen liquid - usually water - precipitation. Closely related to rain and cold weather, snow was present throughout the series, with sections taking place in snowy environments in Legacy of Kain: Soul Reaver, Soul Reaver 2 and Legacy of Kain: Defiance; however it was only in its first appearance in Blood Omen: Legacy of Kain that snow was treated as an environmental hazard due to the vulnerability of vampires such as Kain to water. 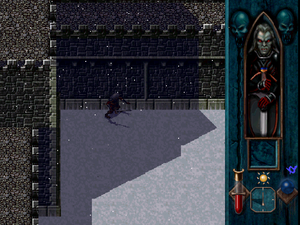 Snow was first seen in Blood Omen: Legacy of Kain where it was largely a successor to the Rainfall encountered in early chapters. Kain could first encounter snow in The Hunt for Malek as he travelled into the region north of Coorhagen and onto Malek's Bastion, encountering a frozen region in the north apparently covered in ice and fallen snow. A little while after Kain emerged into the frozen lands - usually at some point in Malek's Bastion - he would encounter his first snowfall as a vampire and commented on its ability to cause damage to vampires. Like other weather types, snowfall was governed by a certain amount of chance and timing and it could thus be encountered in many locations in the north of Nosgoth. Snowfall was only risky to Kain for a short time as he was able to discover a blood fountain in a cave nearby the Oracle's Cave which granted him immunity to the damage caused by rainfall. Thereafter snow could still fall at random intervals in the appropriate areas but it was largely harmless and was ultimately superseded by the far less predictable and more damaging Warped precipitation.[BO1][BO1-C4][BO1-C5][1] 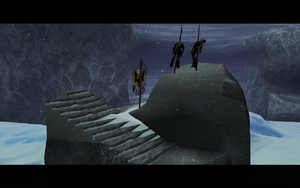 Snow falls in the northern mountains in Soul Reaver 2

Snow returned in later titles but it was largely scripted and atmospheric in purpose with no particular hazard or environmental concerns associated with it; and it was often permanently associated with a particular location or time period. Snow and snowfall could be seen in Legacy of Kain: Soul Reaver in several locations such as the Ruined City and the Oracle's Cave - as with Blood Omen these were locations in the north of Nosgoth, but unlike Blood Omen it continually snowed in these locations.[SR1][SR1-C9][SR1-10]. Snow returned in Soul Reaver 2 where a wintry scene complete with snowfall, grounded snow and ice was shown in all locations throughout the era of Nosgoth's early history; suggesting seasonal changes in weather conditions and a winter period for those chapters.[SR2][SR2-C5][SR2-C7] Snow was last seen in Legacy of Kain: Defiance where a similar 'winter' effect was seen some years later with all of the locations in Kain's chapters in Nosgoth's early history dominated by snow, ice and falling snow.[DEF][DEF-C1][DEF-C3][DEF-C5][DEF-C7][DEF-C9]

"The snow will do you no harm for our blood preserves."
―Blood Fountain — Listen (file info)[src]