"You are changed. Your blood-thirst is replaced by a deeper need - you have become a devourer of souls. To sustain your strength, you must hunt the lost spirits of the Underworld, and consume the souls of your enemies."
―Elder God[src]

Soul Devouring also known as Soul Consumption, Soul Reaving or simply Feeding, was an 'ability' used by Raziel. It was apparently given to him by the Elder God after becoming a wraith.

Soul devouring was first featured in Legacy of Kain: Soul Reaver as an 'innate' ability - apparently gifted to Raziel by the Elder God upon his resurrection as a wraith, replacing his vampiric Blood thirst. In Chapter 1, Raziel would be informed of his new hunger by the Elder in the Underworld.[SR1][SR1-C1]

When in the Material Realm Raziel's Health coil would constantly be depleted, as well as by combat and environmental damage. Soul Devouring gave Raziel the ability to consume Souls of enemies, non-player characters and the lost souls of the Spectral Realm to recover his Health coil. When an enemy was killed, their soul would briefly be liberated into the Material Realm where Raziel could consume it, pulling down his cowl to draw in nearby souls - after a short time, the souls would cross into the Spectral Realm. He could also 'sip' upon the soul of non-combative Humans non-fatally.[SR1][1][2][3] 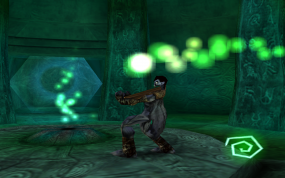 Raziel consuming souls at the soul altar in the Underworld (SR1)

Raziel would use the ability throughout Legacy of Kain: Soul Reaver, most often it was used simply to recover damage, however when Raziel defeated and consumed the souls of his brothers in their boss battles, he was able to gain versions of their abilities.[SR1][SR1-C3][SR1-C5][SR1-C7][SR1-C8][1][2][3]

Soul devouring was retained as an innate ability in Soul Reaver 2, allowing Raziel to consume Souls to sustain himself. As before, Raziel's health would be constantly drained by manifesting in the Material Realm and by taking damage in combat. To recover, Raziel could consume the lost souls of the Spectral Realm or other spectral-native fauna. In the Material plane, he could devour the souls of defeated enemies to the same effect.[SR2][4][5]

Soul Reaver 2 would also feature instances where Raziel's ability to devour souls was temporarily unavailable. Most often this would come as the result of the interference of the Wraith Blade, which would actively devour the souls of enemies, preventing Raziel from feeding - and if over-aroused, it would turn its hunger on Raziel.[SR2][SR2-C1] In the final stages of the game, Raziel recovered the initial Reaver blade which bound itself to him, making him invincible and effectively preventing Raziel from consuming souls.[SR2][SR2-C9] 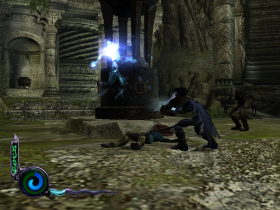 Soul devouring was again featured in Legacy of Kain: Defiance, this time as one of Raziel's unique abilities and corresponding with Kain's Blood drinking. As in previous titles, Raziel's Health coil would constantly decay whilst in the Material Realm, or if Raziel took damage in combat and to refill this he could consume the lost Souls and fauna of the Spectral Realm, or consume the souls of defeated enemies. This time as well as devouring souls from a distance, Raziel could physically rip the soul from a stunned enemy. Raziel could also consume energy from Soul basins to recover himself.[DEF][6][7]

When the Reaver blade absorbed and trapped the soul of wraith Raziel,[SR2-C10][DEF-C13] it gained a reputation for devouring the souls of its victims and became known as the Soul Reaver. The Soul Reaver would make its first appearance in Blood Omen: Legacy of Kain as perhaps the most powerful of the weapons at Kain's disposal, reducing most enemies to pieces in a single strike. Though it had a fearsome reputation, the Soul Reaver was not seen to actually consume the souls of enemies, though it is unlikely protagonist Kain could see the process anyway.[BO1][BO1-C8][8][9][10] The same was true of the later blade used by both the Sarafan Lord and Kain in Blood Omen 2 - the blade had a fearsome reputation for consuming souls that was only demonstrated by the raw power of the weapon; though the death of the Sarafan Lord in an FMV did feature an extra effect.[BO2][BO2-C11] 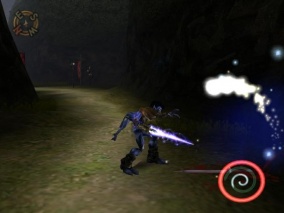 The Soul Reaver and its reputation would reappear in Legacy of Kain: Soul Reaver as the legendary weapon of Kain. When newly resurrected wraith Raziel confronted Kain at the Pillars of Nosgoth, Kain attempted to strike down with the Soul Reaver; but the blade could not consume its own soul and the physical weapon shattered, allowing the soul devouring spirit within the blade to bind itself to the earlier Raziel, becoming his symbiotic weapon - the Wraith Blade. The Wraith Blade was an incredibly powerful weapon that would sustain Raziel's material manifestation and but would be dispelled by a single strike. In combat, the wraith blade completely destroy stunned enemies with its finishing move, but despite its reputation it would not consume the souls of enemies, leaving them for Raziel to consume.[SR1][SR1-C4][1][2][3]

The effects of the wraith blade devouring souls would differ somewhat in Legacy of Kain: Defiance as Raziel was able to choose between filling his own Health coil and Feeding the Reaver, which filled his Reaver charge enabling the use of Charged attacks and Reaver spells in combat. [DEF][6][7] The Wratih blade itself would be imbued with elemental attributes on several occasions and the final enhancements in Defiance would be gained by allowing the Wraith Blade to consume the souls of the original Pillar Guardians (as well as that of former Balance Guardians including Ariel). [DEF-C6][DEF-C8][DEF-C10][DEF-C12] 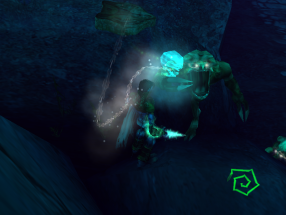 Raziel was not the only creatures to possess the ability to devour souls and throughout his journey he would encounter several enemies that also possessed the ability. The Soul devouring ability was notably used by Spectral-native fauna.