"The birth of one of Kain’s abominations traps the essence of life. It is this soul that animates the corpse you ‘lived’ in. And that Raziel, is the demise of Nosgoth. There is no balance. The souls of the dead remain trapped. I can not spin them in the wheel of fate. They can not complete their destinies."
―Elder God[src]

Souls were the eternal, non corporeal spirits of most, if not all lifeforms in the land of Nosgoth. Souls were featured throughout the Legacy of Kain series with varying presentations and were most notably seen in the Soul Reaver arc, as Wraith Raziel had to consume souls regularly to survive.

Souls resided in the body of their host until death, when they departed for the Spectral Realm. Several species of spectral-native fauna were known to prey on the lost souls in the underworld and some of these souls were apparently fed to the Elder God to maintain the flow of his Wheel of Fate.

The Legacy of Kain series often featured the souls of characters and enemies beyond their natural death, although both the design and relative sentience of the souls have varied. 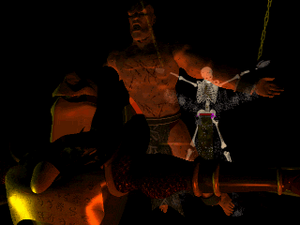 Souls were first featured in Blood Omen: Legacy of Kain, where the ability of Souls to live beyond the physical death of the body was part of the background to the story and an often seen part of gameplay, with souls presented as a semi-transparent figures.[BO1] Three of the major characters of the story were beyond death and in the initial chapters of Blood Omen, Malek's soul was imprisoned in within his armor for his failure to prevent the slaughter of the circle, Ariel's soul trapped at the Pillars of Nosgoth by their corruption, and Kain was assassinated and his soul offered a chance of vengeance and resurrection (as a vampire) by Mortanius.[BO1-C1] Throughout his journey, Kain's quest would be guided by Ariel[BO1-C2][BO1] and he would encounter Malek on several occasions[BO1-C4][BO1-C7] as well as encountering soul-manipulator Elzevir the Dollmaker, who had imprisoned the soul of the Princess of Willendorf in a doll.[BO1-C9] Many enemy characters were also observed after their deaths, as ghosts[BO1][1][2][3] and several items and spells were related to souls and soul manipulation. (see Soul-Related items)

Souls were central to the mythology and back-story to Legacy of Kain: Soul Reaver with Kain having "snared" the souls of his lieutenants to revive them as vampires at the outset of the Soul Reaver era, and this method had been continued giving rise to the vampire clans of Kain's empire[4][5][6] - but through this relationship they had also inherited the the corruption present in Kain's soul, leading to the eventual devolution of the Vampire clans of Nosgoth in bestial forms.[7] After his execution, Raziel was spared "total dissolution" by the Elder God and the Elder immediately voiced his objections to Kain's Empire, blaming the imprisonment of Souls caused by "Kain's abominations" for the "demise of Nosgoth" as well as stalling the Wheel of Fate and preventing souls from completing their destinies. Accepting the Elder's offer of vengeance against Kain, Raziel was revived as a wraith, native to the Spectral Realm and needing to regularly consume souls to refill his Health coil and maintain his Material manifestation (indirectly feeding the Elder and his Wheel of Fate through this process).[SR1-C1][4][5] He was also able to refill his health at a special soul altar in the Underworld and at special platforms notably seen at the Underworld, Pillars of Nosgoth and the Chronoplast.[SR1] 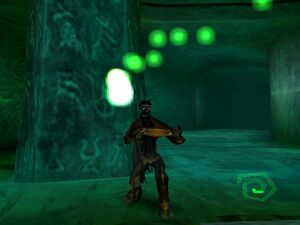 Raziel would encounter many souls throughout his journey, depicted as floating green globes. Upon the death of a Human or Vampire enemy, their soul would be liberated and could briefly be consumed in the Material Realm before it they faded into the Spectral Realm, where many "lost souls" lingered after death. Raziel could also feed on Souls of humans non-fatally by 'sipping' at their soul energy[4][5][SR1][8]. Most significantly however, Raziel could feed upon the souls of his brothers after defeating them and he would then gain their abilities, enabling him to further explore Nosgoth.[SR1-C3][SR1-C5][SR1-C7][SR1-C8] Along with this the legendary Soul Reaver blade returned, wielded by Kain against Raziel in their confrontation at the Pillars and ultimately broken, shattered against Raziel, providing him with the Wraith Blade, his own symbiotic version of the Soul Reaver blade.[SR1-C4][4][5][SR1] After, Raziel was able to meet with the long trapped ghost of Ariel, who would help guide Raziel.[SR1][SR1-C4]

Souls were again featured in Soul Reaver 2 with Raziel's need to consume souls and several related aspects returning. As before, souls could be found in abundance in the Spectral Realm, where they were preyed on by Sluagh variants, or could be gained by defeating enemies in the Material Realm.[SR2][9][10] Souls in Soul Reaver 2 now came in distinct variations, with plain yellow globes for human and animal souls, and blue skulls for demon, thrall and mutant souls; with Spectral enemies maintaining a semi-transparent form when defeated.[SR2] The souls of the Sarafan warrior inquisitors (who would go on to become Kain's lieutenants) were different to other souls, appearing similar to other human souls but were colored blue and they quickly rose away, preventing them from being consumed by Raziel.[SR2-C9] Raziel would also encounter two 'ghosts' in the Post-Blood Omen era - first the apparent spirit of Moebius [SR2-C5](subsequently confirmed to be an illusion[7]) and later whilst at the Pillars, Raziel would once again encounter the spirit of Ariel.[SR2-C5] 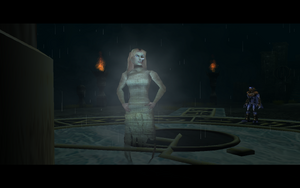 The Soul Reaver blade also took on a new significance in the story, with the Wraith Blade beginning to compete with Raziel for consumption of souls (turning its hunger on him if over-aroused)[SR2-C1] and the revelation of its ability to create potentially history derailing Paradoxes when meeting another version of the blade.[SR2-C5] Raziel would use the wraith blade to trigger several history-altering paradoxes, with it ultimately revealed that the deranged soul devouring entity within the blade was Raziel himself.[SR2-C10] 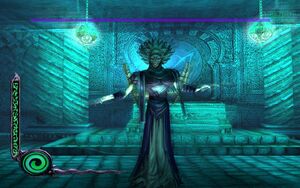 Souls returned in Legacy of Kain: Defiance once again they were heavily involved with Raziel's ability to consume the souls of his enemies, with him now able to physically 'rip' the soul from a downed enemy. As in previous titles, Raziel could recover souls from the Spectral Realm among several spectral fauna or gain them by defeating enemies in the Material Realm though he was also able to fill his health from special Soul basins.[DEF][11][12] Souls in Defiance were more 'humanoid' than previous appearances in the Soul Reaver arc, featuring full bodies (and occasionally faces) appropriate to their species, with Raziel able to observe both human and Hylden souls (when encountering Possessed Revenant enemies).[DEF] Raziel could once again encounter fully sentient ghosts of Ariel[DEF-C6][DEF-C12] and the original Ancient vampire guardians and he could use their souls to power special Soul conduits to upgrade the Wraith Blade,[DEF-C6][DEF-C8][DEF-C10] itself once again a significant part of gameplay and the back-story.[DEF][11][12]

Death and the Wheel of Fate 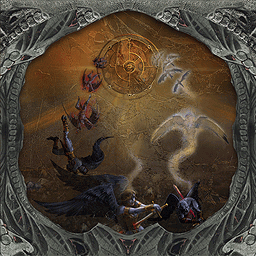 Souls apparently had their origin in the Wheel of Fate - the "purifying" cycle of life, death and rebirth to which all souls were bound.[SR1-C1][SR2-C3][DEF-C2] The soul of a Human, Vampire or other creature inhabited their body until death, when the soul departed for the Spectral Realm, though some could be observed in the Material Realm for a brief period,[SR1][SR2][DEF][SR1-C1] with certain souls able to manifest in the Material Realm as ghosts at will. In the spectral Realm 'lost souls' could be fed upon by agents of the Elder God, such as Raziel and the Archons,[12][SR1-C1][DEF-C2] - indirectly feeding the Elder and allowing the souls to presumably be re-spun in the Wheel of Fate and be reborn, ignorant of their former lives.[DEF-C13] Whilst in the Spectral Realm however, the souls were vulnerable to soul scavengers such as Sluagh[SR1-C1] and Vampire wraiths.[SR1-C3]

As the vampire races were immortal their souls were "imprisoned in the flesh" and could not be re-spun in the wheel,[DEF-C10][DEF-C12] which would eventually cause the wheel to stagnate in the late Soul Reaver era[SR1-C1] thus the Elder considered them an "abomination"[SR2-C3] and actively sought to eliminate them, covertly manipulating "All the conflict and strife throughout history" to ensure the flow of souls to the wheel of fate.[DEF-C13]

The Elder God appears to feed off the souls in the Wheel of Fate, but his claims to be "the hub of the wheel"[SR2-C5][SR2-C3] are questionable. Beginning in Soul Reaver 2, Raziel repeatedly voiced his opinions that the Elder was in fact merely a hungry parasite[SR2-C5] and that he did not truly resurrect him.[SR2-C9] When questioned about Raziel's resurrection Amy Hennig commented "What you're hearing is that character's opinion and subjective interpretation. So if you mean: "did Raziel just drop into the EG's lap by coincidence, or did the EG have something to do with his resurrection?" Let's just say Raziel doesn't know everything yet, and neither do we.".[6] Daniel Cabuco would later clarify the Elder's role in the wheel: "The Elder God is a demiurge, a false god. The wheel is a form of soul recycling that occurs on Nosgoth, and he is a parasitic element to it. Claiming to be the wheel itself when in fact he siphons souls out of the wheel growing more powerful with each passing age", suggesting that the Elder is an external force within the wheel, but one that is nevertheless "powerful enough to hook itself up to the wheel of time/universe and manipulate its energies".[13]

Throughout the series several items and abilities have involved the use or manipulation of souls, perhaps most significant among these was the Soul Reaver blade noted for consuming the Souls of its victims and the several soul-displacing Possession abilities. 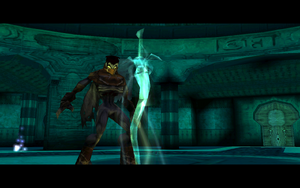 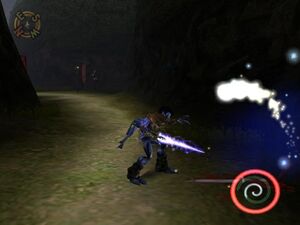 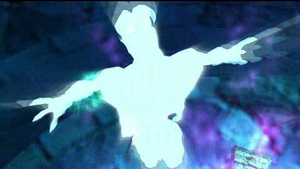 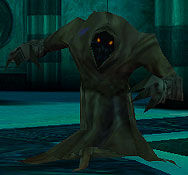 Many enemies encountered in the series were related to souls in some manner, particularly related were those inhabiting the Spectral Realm.