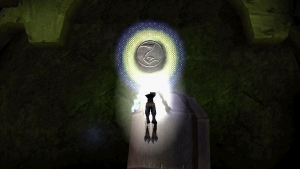 The Sound Glyph is the third Glyph Spell that was acquired by Raziel. It can be found in the Zephonim Territory. To obtain it, Raziel needed to have the Phase Through Gates, Scale Walls and telekinetic force projectiles ability. Raziel had to simply strike a bell in the temple with a mallet and after that, the glyph appeared. It requires 4 points of eldritch energy to use. When used, Raziel clapped his hands once and an ultrasonic wave would stun all nearby vampires. It cannot kill them though and it has no effect on humans. It should be noted that once stunned, they can be killed with a finishing move.

The Sound Glyph was originally much more powerful, as seen in the Soul Reaver Later Beta version. Its shockwave actually kills the stunned vampires. This feature is described in the manual but was cut from the retail version of the game.