The Spectral Realm in Soul Reaver 2.

The Spectral Realm was one of three known planes of existence within Nosgoth. It was the world of the dead, and a darker, more twisted version of the Material Realm. Lost souls wandered its endless twilight.

In the spirit world, terrain was distorted, physical actions were ineffective, and time was irrelevant. The pervasive Elder God inhabited this realm, as did discorporated entities such as archons, Sluagh, and wraiths.

"Sustain your strength to prolong your manifestation in the physical world. If you fail to feed, or absorb too many wounds, this fragile matter will dissolve."
―The Elder God[src]

The souls of all beings drift into this world after mere moments in the Material Realm. There they linger until they are claimed by the realms inhabitants, who in turn feed the Elder God(minus the Sluagh).

The Elder God maintains the Wheel of Fate ( the "purifying cycle of Life, Death and Rebirth to which all souls are bound") and presumably eventually resurrects these souls in the Material plane ( although this was doubted in Soul Reaver 2 by Raziel, the Elder does demonstrate his power of life and death by the resurrection of Moebius at the end of Defiance ) 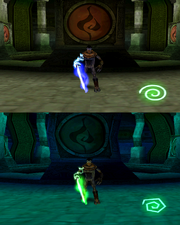 Traveling between the planes is rarely an easy feat. Raziel acquires the ability naturally upon his death as a vampire and resurrection as a "Reaver of Souls". The Elder God grants him portals with which to cross over, and without them he is unable to move from the Spectral Plane to the Material Plane. He can, however, move in the reverse at will, or upon the destruction of his physical body.

In Defiance, Raziel displeases the Elder God and is no longer granted access to the portals. He does, however manage to find a way to project himself into rotting corpses in the Material Realm and use them to grant him a physical body. Other characters utilise the spectral realm in other ways:
due to his fragility, Melchiah is able to partially dematerialize himself and phase through certain objects. Melchiah is technically taking his body with him as he shifts between planes.

Mortanius demonstrates the ability to cross realms at the beginning of Blood Omen, when he offers Kain the chance of revenge, although the spectral plane observed here is very different from those observed in later games, notably instead of being blue, it is distinctly red and covered in flames, more closely resembling the Demon Realm seen in Turel's pit or classic views of Hell.

It is also likely that Kain himself, like his maker, had access to the Spectral Realm in order to capture the souls he would revive (although this ability has, thus far, not been seen by the audience; and the Defiance Comic even contradicts this, implying Kain has never visited the Spectral Realm), indeed, the ability that Raziel would originally have gained from Kain would have enabled him to Shift-at-Will.

The Spectral Realm exists alongside the Material Realm and is inhabited by many different species including: