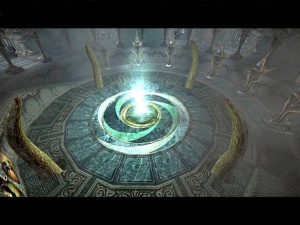 The Spirit forge called the souls of all balance guardians to itself once activated and was the final imbuement for Raziel to find in Legacy of Kain: Defiance.

In Soul Reaver 2, Raziel found different elemental forges with which he could temporarily imbue the reaver with elemental attributes aligned to each Pillar of Nosgoth . During Defiance, the wraithblade could be imbued in the forges in the Vampire Citadel and it retained the elemental baptism permanently.

Spirit Forge was the only forge attuned specifically to the balance pillar and required all 8 reavers forms to activate. Unlike the other forges, it contained the energies of every balance guardian that came before Kain. When the Spirit Forge was activated it summoned each of the balance guardians (represented by Ariel) and by absorbing their spirits, Raziel had obtained the strongest incarnation of the wraithblade yet, the Spirit Reaver.

The scene where Ariel is restored and absorbed into the Wraith blade to forge the Spirit Reaver echoes one of the scenes in the Chronoplast from Soul Reaver. Ariel, now restored, seems more accepting of her destiny. These scenes were from the original Soul Reaver storyline, where Ariel would have been taken into the reaver to create the 'Ariel Reaver' - the only weapon that could destroy Kain according to the dialogue.

This forge, though much larger in size than the rest of the forges, maintains similar circular structure, with the spirit flame in the middle. It had a platform with the spirit symbol and Raziel had to activate beacons which responded to a certain element. Like the other forges, it had a cupola roof with an opening in the center. In other reach the forge, one must first open the interior sanctum with the Balance emblem, use the Ouroboros on the inner door and walk the long hallway decorated with golden winged statues.

In this storyline, The Spirit Reaver, and spirit forge were actually separate from the Ariel Reaver and Raziel would have used souls to imbue the Reaver with spirit, much like "feeding the reaver" in Defiance. The concept of the Spirit forge and reaver were also planned for an early version of Soul Reaver 2, again they were unfinshed and removed, but ruins prominently bearing the spirit symbol at the bottom of the lake outside the Sarafan Stronghold suggest this was that games spirit forge location and that it would have been visited in a very early time period.