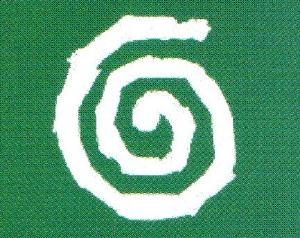 The Spirit Glyph symbol, mislabeled as the "Stone Glyph warp symbol" in the Prima Guide

The Spirit Glyph was a deleted Glyph spell that Raziel was intended to have gained in the original version of Soul Reaver . The Glyph and it's accompanying Wraith Blade enhancement, The Spirit Reaver, were cut due to timing and budgetary constraints.[1]

Little is known about the deleted Spirit Glyph including it's operation or implementation. Developer interviews describe the glyph spell as a "vortex of soul sucking energy". The Glyph symbol is shown in early Soul Reaver artwork as sharing the Soul Spiral of Raziel's health meter.[1]

The description of the Spirit Glyph spell is noticeably reminiscent of Soul version of Kain's Blood Shower spell from Blood Omen, allowing Raziel to kill and consume the souls of multipleenemies at once. Kain and Raziel are both able to feed from multiple enemies at once in Defiance, though the enemies must be in a 'waver' state.