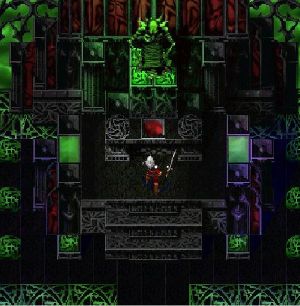 Spirit Forges are hidden chambers where Kain could exchange some of his Blood for Battle Artifacts. They are featured in Blood Omen.

Kain found his first Spirit Forge in Blood Omen shortly after he passed the pillars. The Spirit Forges had contained curious green symbols and were supposedly inhabited by wraiths and shades, Inside a green horned individual, the wraith smith, offered the Kain Artifacts in exchange for a sampling of his blood. Kain commented that the Wraith smiths forged their items with forfeit souls. Kain would encounter many similar forges in Blood Omen, but they were not featured in further titles.

Kain claims that the Spirit Forges are inhabited by wraiths and shades, but these do not appear to be the same as Wraiths or shades seen later in the series. Kain also claims the wraith smiths can offer items beyond mortal dreams.

Many Spirit Forges were hidden behind Moon Gate and thus had to be visited on a full moon, whether this relates them to the architects of the Moon Gates or those of the Lost City is unknown.

The architecture and decoration of the Spirit Forges is particularly unusual; visually it does bear some similarity to Hylden designs but no connection between the two has ever been established and the origins of these forges remains a mystery.

Many Spirit Forges had secret 'back door' entrances which could be used to enter the Spirit Forge at any time. Kain could also use Control Mind to send humans in his place. This method allowed Kain to take a profitable revenge upon Ziegsturhl's Barkeep.