States was a sphere of metaphysical law within Nosgoth, and one of the nine magical principles harnessed and governed by the Pillars of Nosgoth. Alongside its sister principle, Death, it was associated with the elemental force of Water, which, in turn, was aligned with the overarching principle of Darkness.

The principle of States concerned the distinctions taken on by substances within Nosgoth, such as solids, liquids, and gases. The States Guardians, culled by the Pillars, could defy physics, warping and transitioning between physical forms, and were charged with presiding over the shapes and forms of all physical matter. 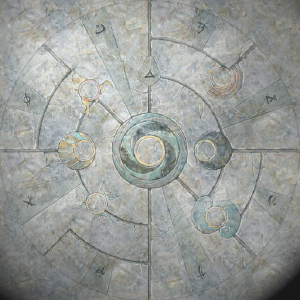 As a magical and metaphysical fundament, States was effectively made manifest everywhere in Nosgoth, but was most prominently and saliently represented by the Pillar of States, which was raised before Nosgoth's recorded history.[BO1-C9][SR2] The Pillar, like its eight counterparts, was intrinsically linked to the health of Nosgoth, and was protected by the States Guardian, who served as a personification of the principle.[1] At least three States Guardians were known to exist: the original Guardian, a martyred Guardian, and Anarcrothe the Alchemist.[SR2][BO1][DEF][2]

The ancient vampires recognized States as being linked to the principle of Death by its association with the elemental force of Water.[3][DEF-C6] Water itself was aligned with the elemental force of Darkness.[SR2][3] When Raziel encountered the specters of the original States and Death Guardians in the Vampire Citadel, he harnessed and absorbed their soul essence to obtain the Water Reaver.[DEF-C10]

Like all of its peers, the representation of States on the Pillar of States changed between its Blood Omen: Legacy of Kain debut and Soul Reaver 2.[SR2][BO1][SR1][7] In its original form, States was symbolized in the form of a portmanteau of the icons for Kain's Bat Form, Mist Form, and Wolf Form adorning the band near the base of the Pillar.[BO1] In Legacy of Kain: Soul Reaver, the same Pillar simply featured a dark, gray texture.[SR1] Soul Reaver 2, and all Legacy of Kain games since, have consistently used a distinct, abstract symbol to represent States, both on the Pillar band and elsewhere.[SR2][DEF][BO2] One instance of what may be an alternative symbol appears in a mural in Soul Reaver 2's Light Forge.[SR2]

Soul Reaver 2 was planned to feature a glyph spell associated with States for Raziel to wield, and Legacy of Kain: Defiance was intended to include a States enhancement and fragment for Kain's Balance Emblem. However, both were cut from the respective titles.[8][9][10]

The mythological relationship between the Pillars' nine magical principles and the classical elements was first suggested by a diagram seen on the main platform in the Subterranean Pillars Chamber of Soul Reaver 2, and was confirmed in Legacy of Kain: Defiance.[SR2][DEF][3] The Complete Guide To Legacy of Kain, Prima's Official Strategy Guide - Legacy of Kain: Defiance, and series art director Daniel Cabuco, clarified the definition of States, and the roles and responsibilities of its Pillar Guardians.[5][6][11]