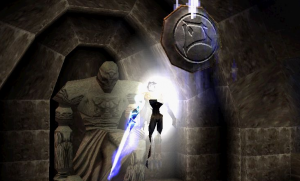 The Stone Glyph can be founded in a hidden cave at the peak of Nupraptor's Retreat. To obtain it, Raziel had to solve a picture-box-flipping puzzle (similar to the ones found in Zephon 's terroritory). Once completed the statue that is kneeling down in the room will raise it's hammer and break a stone and release the glyph. The glyph allows Raziel to temporarily turn enemies into stone (like the gorgon Medusa) for the cost of 2 eldritch energy units.

When applied to a non-boss vampire, the vampire becomes easy prey for Raziel to perform his final blow move. As for the pictures themselves, they might be a depiction of Raziel's role as an agent of the Elder God ; the pictures show a skeletal with wings creature (possibly Raziel) siphoning something from what appears to be humans, and is siphoning that to a head on a spiral (possibly the Elder God). What the meaning behind all this is unknown, perhaps Moebius visited Nupraptor before and gave him a prediction of the future.