"From the look of it, this door had been sealed for centuries. I began to realize it was no mere coincidence that I found myself standing here – beneath this winged figure, with blue skin and cloven hands so like my own... and bearing this unique key."
―Raziel — Listen (file info)[src]

The Subterranean Ruins were one of the main locations visited by Raziel in Soul Reaver 2. Consisting of a set of large underground caverns stretching from the Pillars to the Swamp, the ruins were featured as a main area on maps and were encountered by Raziel as a playable location in all of the eras he visited in Soul Reaver 2. 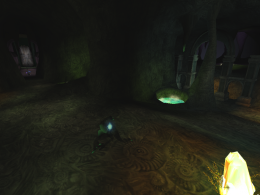 scenery of the Subterranean Ruins

The Subterranean Ruins was a significant playable location in Soul Reaver 2 and one of the main areas on the map, shown as encompassing an underground area broadly curving around the west of the main Pillars area. Raziel first encountered the ruins in the Pre-Blood Omen era in Decision at the Pillars, shortly after meeting with Kain at the Pillars. Passing behind the Pillars, Raziel found a hidden series of passages leading to a large sealed door bearing the likeness of an Ancient vampire and a Soul Reaver symbol. Using the Wraith Blade to unseal the door, Raziel entered the Subterranean Ruins, finding that it consisted of several large caverns, containing mysterious ruins. As Raziel progressed through the caverns, he found the ruins led down to a chamber beneath the Pillars containing several murals of the events in the period Before Nosgoth's recorded history and the Elder God himself. Swimming underneath the chamber, Raziel entered a series of submerged caves extending further into the ruins and shortly after emerging from the water he discovered a large submerged chamber containing an unusual statue. Progressing beyond this chamber, Raziel could swim upwards through a largely vertical ascending chamber, which emerged nearby a scalable wall which led upwards to a small ruined building in the Swamp.[SR2][SR2-C2] 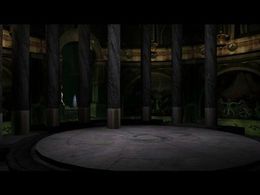 After investigating the Swamp and gaining the Dark Reaver from the nearby Dark forge in Through the Swamp, Raziel returned to the Subterranean Ruins, passing through the caverns in reverse to the Pillars and, once again conversed in an increasingly adversarial fashion with the Elder God in the Subterranean Pillars Chamber.[SR2][SR2-C3]

After returning to the Sarafan Stronghold and using its time-streaming chamber to travel to the Post-Blood Omen era, Raziel would again venture into the Subterranean Ruins in A Fateful Meeting, shortly after meeting with Ariel at the Pillars. In this age, much of Nosgoth was under demon assault, and this situation continued into the ruins, with a first Gas demon and then several Acid demons present in the caverns themselves. Again confronting the Elder God in the Subterranean Pillars Chamber and openly mistrusting him, Raziel continued through the ruins and found that in this era the water level beyond the pillars chamber had dropped, revealing several cavernous chambers, exposing more of the unusual statue and necessitating Raziel to take a different route through the caves, ultimately using a shadow bridge to ascend the final chambers and reach the scalable wall to the swamp.[SR2][SR2-C5] 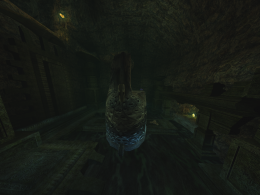 Using an abandoned time-streaming chamber in the Swamp, Raziel was ultimately able to travel back into Nosgoth's early history in On to the Past. In this age, the Subterranean Ruins could be entered at will, but contained little of significance[SR2-C7] until Raziel returned to the ruins after the murder of Janos Audron in Blade of Vengeance, when Raziel passed through whilst chasing the Inquisitors back to the Sarafan Stronghold. Travelling through the ruins from the swamp, Raziel found that the previous water level had dropped to its lowest level, draining the 'ascension room' completely and requiring the use of several Air plinths and Shadow bridges to proceed through the caverns, whilst assailed by demons. The statue room had also been completely drained, fully exposing the statue, and also requiring the use of Scalable walls and Air plinths to progress through and reach the submerged passages on the way to the Subterranean Pillars Chamber. On this final visit, the conversation between the Raziel and the Elder God was slight and confrontational, with the Elder addressing Raziel with "ominous finality" and Raziel responding in kind, rejecting all that the Elder had taught him and embracing the defiance of his former mentor.[SR2-C9] 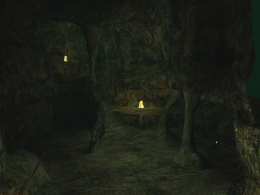 The bottom of the drained ascending chamber

The Subterranean Ruins had the appearance of a set of natural caverns. Together with the passages leading away from the pillars, the layout of the caverns encompassed a wide passage broadly curving westward and circling down to the Subterranean Pillars Chamber positioned directly beneath the pillars, before heading off towards the north-west and onto the statue room and gradually rising up through several ascending chambers to the Swamp entrance.[SR2][1]

From the high ledge above the Pillars clearing north of the pillars, the initial chambers leading to the ruins passed westward through a series of rocky tight dark twisting passages with occasional tall grasses before opening out into a wider rocky canyon which curved towards the south, descending through several minor rocky 'step terraces' to the large mural door positioned almost directly west of the Pillars. Inside the mural door, a short straight passage decorated with Reaver icons headed southward into the first of the underground areas, opening into a wide natural cavern with the first of many recurring features of the caverns, including many stalactites and stalagmites (some of which dripped a luminous fluid into pools), the floors covered in Ammonite fossils and many glowing crystals with Crinoid-like growths which provided the main source of light in the darkened caves. The first cave curved to the east where a large triple arched structure provided a gate further into the ruins. The next chamber zig-zagged and passed through another triple arched ruin before a tiled path began leading east down a grand ornately decorated staircase covered with Reaver depictions which turned north into the Subterranean Pillars Chamber with its many murals and features.[SR2][1]

Beyond the Subterranean Pillars Chamber the natural cave appearance of the ruins returned as submerged passage headed north-west rising sharply through a cave-like chamber and surfacing into a short connector which spiraled upward to a high platform overlooking the statue room. The statue room itself was a wide open chamber dominated by the large distinctive statue at its center covered in many 'eyes' and overlooked by four large circular plinths at the corners as well as several other box-like constructions with the room decorated by many basic 'squiggle' and spiral-like patterns - features which appeared to be quite different and primitive in comparison to the ornate tiled decoration of the earlier ruins chambers. Beyond the statue room, another natural cavern with many rock formations, Reaver enhancement features and ledges (submerged with different levels of water in different eras) continued north-west, rising steadily up a high 'ascending' chamber and eventually reaching a scalable wall which led up to a ground level reaching the surface inside a ruined battlement in the Swamp area.[SR2][1] 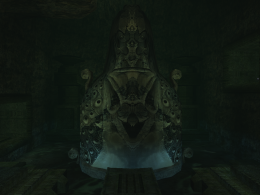 The statue of the Elder in the Ruins

Aside from the Subterranean Pillars Chamber, the statue room was perhaps the most notable room of the Subterranean Ruins, containing ruins of arguably a more primitive construction than those of the Ancient vampires, seen in the chamber leading up to the Sub-Pillars room. Despite the unusual construction, neither the statue nor any other of the rooms contents are commented upon by Raziel and the purpose of the statue was not revealed in the games.[SR2]

Asked as to the origin of the statue in the Subterranean Ruins, Chris Bruno responded: "Amy told me it's simply a statue, a symbolic representation of the Elder God fashioned by an ancient, primitive cult".[2] Beyond their worship of the Elder, little else is known of the cult and it was not clear whether they were related to the ancient vampires or Moebius (fellow Elder God worshippers); their race was unknown, and it is uncertain whether or not they survived into any of the eras explored by Kain and Raziel.[SR2][DEF] The statue is also significantly placed close to the pillars, where the Elder resides in Soul Reaver 2 - and with the Elder apparently growing as time progresses, the statue would appear to be near to his very point of origin.[3] 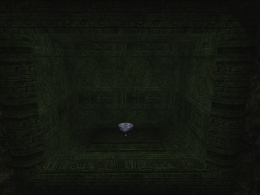