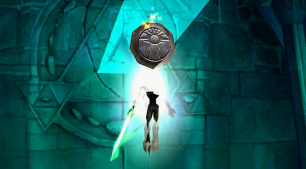 The Sunlight Glyph is the final glyph that Raziel can acquire in Soul Reaver . It can be found in The Lighthouse Territory. To obtain it, Raziel had to solve a puzzle by lighting the lighthouse. After that, Raziel had to go to the temple of the glyph and obtain the glyph, although the glyph can be only found in the inner room of the temple. Raziel had to shift to the Spectral Plane when the light touched the symbol in the temple. After that, the glyph can be acquired. This is the most powerful glyph to use against vampires. When used, Raziel holds his hand high up and a light flashes and it creates a giant wave  of sunlight which causes the screen to flash and it kills any vampire visible in the area. As the final glyph, it is the most expensive to use, then it requires 10 points of Eldritch Energy to use. It should be noted that it truly kills any vampire that the player can see and no non-boss enemy vampire can survive the attack, although it does not harm or kill humans.