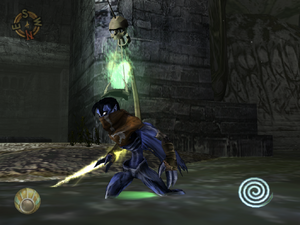 "Strange that Vorador would choose a dwelling so perilous to him. The swamp could only offer a vampire hazard and pain."
―Kain — Listen (file info)[src]

Swamp was a terrain type featured in Blood Omen: Legacy of Kain and Soul Reaver 2. The effects of swampy terrain on Kain and Raziel differently due to their differing immunity to water - however both had their progress slowed and were required to tread carefully to negotiaite it.

Swamp terrain was first seen in Blood Omen: Legacy of Kain the terrain notably made up a large portion of the Termogent Forest and would will damage Kain if he stepped from the greener paths into the darker more murky and watery sections - he was thus required to slow his progress and tread carefully to avoid being damaged by it. One method of negating the damage incurred by the Swamp was to change forms - with Mist Form able to withstand its effects without damage as it could over regular water. [BO1][BO1-C6][1][2][3] 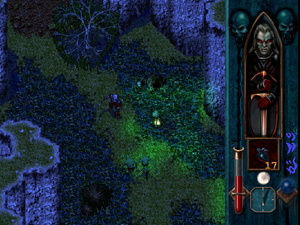 The swamp terrain returned in Soul Reaver 2 in the eponymous Swamp region - itself hinted to be close the to previous Termogent Forest area. As Raziel was already immune to water, the swamp did not damage him as it had Kain, instead merely slowing his progress and forcing him to wade through it with difficulties. Raziel could avoid the effects of the swamp by jumping between the more solid areas and in combat he was unaffected - The effects of the swamp could also be negated entirely by wielding the Air Reaver which enabled Raziel to run normally through the swamp areas. As with other types of water, the swampy terrain had no effect in the Spectral Realm.[SR2][SR2-C3][SR2-C5][SR2-C7][SR2-C9][4][5]

Swampy and marshy terrain is not explicitly seen in further titles. The presumably swampy Termogent Forest is briefly glimpsed outside Vorador's Mansion, but it is seen only in cutsecenes and not shown clearly - in gameplay similar shallow water does not seem to have the same effect in the title.[DEF][DEF-C8] 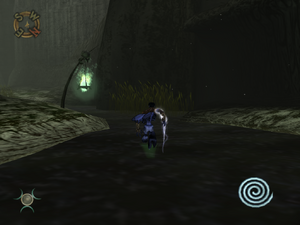