"Infused with Rahab’s soul, you have overcome your former vulnerability to water’s touch. Immersion in water will no longer dissolve your physical body, enabling you to swim to areas heretofore beyond your reach."
―Elder God — Listen (file info)[src]

Swimming was first featured as an earned ability in Legacy of Kain: Soul Reaver. The ability was originally developed by evolution of vampire Rahab and his clan in the Soul Reaver era due to their adaptation to water. Initially Raziel's Material Realm manifestation would be dissolved by immersion in water and he would be forced to the Spectral Realm where water had "neither heft nor lift".[SR1][SR1-C1][1][2][3] When Raziel ventured to the Drowned Abbey in Chapter 7 he would encounter the Rahabim vampires who had overcome the vampires weakness to Water and become aquatic creatures. Entering Rahab's lair, Raziel defeated Rahab and consumed his soul gaining the ability to swim.[SR1-C7][1][2][3]

After gaining the ability Raziel would survive immersion in water unharmed and could actively swim to gain access to previously unobtainable passageways. Once in a water-filled area, Raziel could swim along the surface or dive underwater; swimming with a constant speed (by holding the 'jump' button) or stroking repeatedly to gain speed (by repeatedly tapping the 'jump' button) and he could turn quickly (by holding the 'autoface' button). While swimming, Raziel's other mechanics were limited - the camera could not be maneuvered freely, Raziel could not enter combat and projectile use was limited - largely leaving Raziel to more evasive methods against water-based enemies. Raziel could climb out of the water at low ledges or he could crouch-jump to reach higher areas.[1][2][3][SR1] Raziel would continue to use the ability throughout Soul Reaver, initially using it to swim beyond the Abyss to the Ruined City of the Dumahim (as well as several Glyph altars).[SR1][SR1-C8] 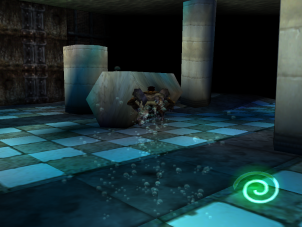 Swimming was retained as an innate ability in Soul Reaver 2 and could be used at any time by Raziel; thus the puzzle-orientated aspects of avoiding Water-filled areas were largely abandoned and Raziel could fully explore these areas by swimming. The swimming ability featured much of the same functionality as previously, with water areas in the Spectral Realm having no buoyancy, whilst in the Material Realm Raziel was able to swim along the surface or dive underwater, swim with two different strokes (of differing speeds) and climb in and out of water filled areas using ordinary or crouch-jumps. Swimming had the same limitations as previously although with lesser water-based threats and puzzles, these were arguably negated somewhat. [SR2][4][5]

Swimming was again featured in Legacy of Kain: Defiance, this time as one of Raziel's unique abilities and roughly corresponding to Kain's vampiric Water-vulnerability. As is previous titles, water had no buoyancy in the Spectral Realm, but in the Material Realm Raziel could swim at his leisure; able to swim at the surface or underwater, propel himself with strokes of differing speeds and climb in and out of water-filled areas. Swimming had several limitations however, preventing Raziel from entering combat, using Telekinetic attacks or manipulating items and objects - these limitations would largely be overcome when Raziel gained the Earth Reaver, which allowed him to sink and walk on the bottom of underwater areas and interact with submerged objects.[DEF][6][7]