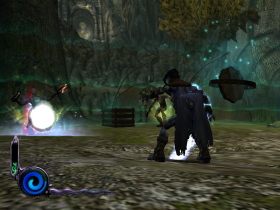 TK (Telekinesis), Manual TK or just TK [1][2] is the psychokinetic abilities of Kain and Raziel as they are presented in Defiance. It is the ability to manipulate surroundings with the mind and it is used extensively as both a combat and puzzle mechanism in Defiance.

Raziel and Kain both start Defiance with TK (presumably as a result of their pre-existing 'telekinetic' abilities - Telekinetic Force Projectile and Telekinesis respectively.), though initially Kain's version is stronger and more versatile. The usage of TK in the game is dependant upon the TK Meter (a gauge similar to Kain's Magic Meter from Blood Omen), which drains whenever Kain or Raziel uses TK, but automatically refills itself over time. TK automatically 'locks-on' to enemies in auto-face mode and can be used in its most basic combat form to fire 'telekinetic projectiles' at enemies, increasing damage if the enemies strike breakable or solid objects, fire or fall from ledges or onto spikes (the latter two in-particular often result in an instant kill).

TK can also be manually aimed (similar to the previous usage of Telekinesis and Telekinetic Force Projectile), through a circular reticle, this enabled Raziel or Kain to choose enemies to strike, but also enabled them to manipulate objects at a distance. 'Manual TK' was also able to be used to ignite flammable objects with the Fire Reaver or Flame Reaver enhancement.

In addition, Kain initially started Defiance with a more enhanced TK, allowing him to hold enemies in mid-air and throw them in any direction. Raziel was later able to gain Enhanced telekinesis (apparently an updatedAmplified Force Projectile), by defeating his brother Turel, which 'evened out' the TK abilities, allowing Raziel to perform the same moves that Kain had from the beginning.

TK can also be used to break walls and push Telekinetic switches.

In Defiance,Kain begins with much more powerful and versatile TK abilities; along with the obvious differences, this is evidenced by Raziel using two arms to use TK, whereas Kain only uses one.

Raziel and Kain both gain Special Attacks based upon the TK ability (Stasis Field and Kinetic Shackles respectively), these both appear to use TK to 'hold' an enemy in mid-air, allowing Raziel or Kain to focus on other enemies. Raziel's 'Stasis Field' move cannot be gained until after he has the Enhanced telekinesis (allowing him to hold enemies in the air.)

TK is part of a long line of 'Telekinetic ' abilities, for both protagonists, seen in the Legacy of Kain series . Blood Omen features several 'magical projectile' abilities, notably Energy Bolt. By Blood Omen 2, Kain has gained the Dark Gift Telekinesis (which greatly resembles 'Manual TK') from the Seer, since the TK ability is not seen being gained by Kain is quite possible that TK is a development of Telekinesis.