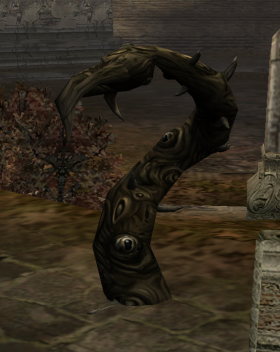 A Tentacle in Defiance

Tentacles were apparently predators of the natural world that resided, somehow, in the Spectral Realm. When the Pillars of Nosgoth were corrupted, the tentacles began appearing in the Material Realm.

Tentacles could easily burrow through the ground and then burst upwards into the air to catch their prey. The 'body' of a tentacle was covered in a sickly green gnarled skin through which bony barbs poked through. Their extremities had a vampire-like claw made out of the same bony material as the barbs which they used to rake at their prey. Another tactic they used was to burst up as normal, then wrap their 'bodies' around the victim and both crush them and lacerate flesh with their barbs. They seemed to detect movement through the vibrations of their prey on the surface.

They didn't appear to have souls of their own, though they did bleed normal red blood. It should also be noted that the Nature Guardian could command them. Theoretically, since he could animate plants and change other natural creatures, the spirit of the first vampire nature guardian could have originally created them to help protect the fire forge.

Although visually the Tentacles appeared to be a part of the Elder God, they were in fact quite separate (evidenced by their different colour blood).