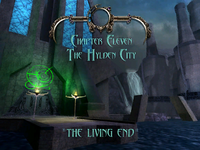 Chapter 11: The Hylden City: The Living End is the eleventh and final Chapter of Blood Omen 2 . It followed Kain's progress through the Hylden City and subsequent attempts to destroy the Hylden Gate, defeat the Sarafan Lord and recover the Soul Reaver Blade . The Chapter is followed by a short epilogue. 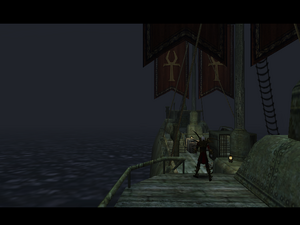 Kain arriving at the Hylden City on a Sarafan Ship

After stowing away on a Sarafan supply ship travelling from the Wharves to the Hylden City, in Betrayal (chapter), Chapter 11: The Living End showed Kain's unceremonious arrival at the Hylden City - crashing the (now corpse-ridden) ship into the Hylden harbour and 'disturbing' the Sarafan Lord, whoTeleported to the harbour and confronted Kain, finally discovering that Kain had in his possession the Nexus Stone (and was therefore invulnerable to the Soul Reaver blade). The Hylden General confirmed that, with the Device destroyed, the Hylden army would take Nosgoth by force, crossing over from the Demon Realm to the Material Realm 'en masse' using the Hylden Gate. The Hylden Lord teleported away, leaving Kain to sneak into the Hylden City and attempt to deactivate the "magic shield", (identified by Janos in Chapter 9:the Device.[1])

Unleashing a Greater Demon in the main entranceway to the city, Kain was able to remove most of the Hylden scientists and Warriors guarding the front entrance and was able to approach an elevator which took him down to the Main square of the Hylden City. In the main square, Kain met and conversed with two Slaves who had heard of Kain's exploits and were able to direct him to the set of buildings that contained the Shield Generator and the Floating vehicle he would have to use to access that area. They also pointed out "where the demons first appeared"[2] - The Hylden Gate - across the far side of the square.

Passing through a number of buildings and rooms, Kain was able to reach the 'shuttle bay' of the Floating vehicle and defeat theHylden guards, enabling himself to be loaded into the cargo container of the Floating vehicle and ferried across to the Shield Generator. Once Kain had reached the opposite 'shuttle bay' he was able to reach the Shield Generator and was confronted by its protector - the Shield Guardian. Using Telekinesis and Glyph seals to collapse the generator onto the Guardian, Kain was able to deactivate the "Ward barrier"[3] protecting the city and enable Janos and Vorador to Teleport into the room.

With Vorador and Janos' appearance, Kain was forced to admit to Vorador that he had murdered Umah after she had betrayed him by stealing the Nexus Stone. Kain and Vorador clashed, with Vorador calling Kain a "Monster"[4] and Kain openly threatening Vorador. This discord was interrupted by the arrival of the Sarafan Lord, who fired several Reaver bolts at the Vampires, apparently severely injuring Vorador and forcing Janos (injured by the bolts himself) to tend to Vorador, rather than aid Kain. Janos explained to Kain that he would have to continue on his own and that by dropping the Nexus Stone into the Hylden Gate, he would be able to sever their connection to the Demon Realm and thereby kill every Hylden in Nosgoth (though at the cost of his defense against the Soul Reaver). Sending Kain on his way,Janos teleported Kain to the far side of the main square and the entrance building to the Hylden Gate. 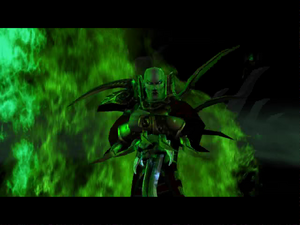 Kain impaled the Sarafan Lord with the Soul Reaver, who warned Kain that the Demon Realm "ensures [their] immortality" - the Hylden would return and Kain promised that he would be waiting.[5] As Kain left the collapsing Hylden Gate he contemplated Umah's last words - how his rule would differ from that of the Sarafan Lord- and how he would put down the remains of the Sarafan and finally conquer Nosgoth for himself.[6]