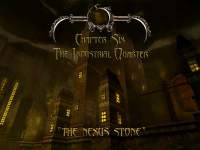 Making his way past the Dam into the Main Factory, Kain overheard Sebastian warning guards about his presence. Kain, however, managed to make his way to the chamber where the Nexus Stone was kept. However, as he was about to pick it up, Sebastian confronted him and the two fought.

After a fierce duel, Kain killed Sebastian and absorbed his dark gift Berserk. However, in his dying words, Sebastian told Kain about Nosgoth's coming doom and the Device. Kain tore the Nexus Stone out of its portal and triggered a series of explosions throughout the factory[BO2].

Saved by a the Cabal Vampire who happened to witness Kain's fall from the roof of the factory, Kain woke up in the Sanctuary and he expressed his astonishment at Vorador's decision to leave the Nexus Stone with him. In addition, Kain also told Vorador of Sebastian's death and the Device. Vorador told Kain of his knowledge of the device: "Ancient legends [that] speak of huge machines deep in the earth left by Gods in eons past".[3] However, he proposed to Kain that he visit the Seer who lived in the Canyons. Upon Kain's request, Vorador agreed to show him a way out of the city but warned him of strange beasts that the people called Demons.[4]