"This era is of no further use to me. You will operate this device to provide me passage. I want to see the world in a simpler time – before the Sarafan began their crusade."
―Raziel — Listen (file info)[src]

The Time Streaming Chambers were a set of three largely identical devices used to transport individuals through the Time-stream to the same chamber in the future or the past. After being seen briefly at the end of Legacy of Kain: Soul Reaver, the Time-streaming chambers were featured as playable locations in Soul Reaver 2 and were used at scripted occasions to allow Raziel to travel between time periods.

The Time-streaming chambers were first observed at the end of Chapter 10 of Legacy of Kain: Soul Reaver as Raziel battled Kain in Moebius's Chronoplast chamber in the Soul Reaver era and pursued him as he activated the device and retreated through a portal into the Time-stream. Following Kain through the portal, Raziel emerged in a darkened time streaming chamber, where he was met by Moebius himself.[SR1][SR1-10]

These events were re-capped in the Soul Reaver 2 Prologue, which once again depicted Raziel's arrival in the (now much brighter) time-streaming chamber, where he was greeted by Moebius.[SR2][SR2-C0] Moebius's introduction was continued in A Reaver in Time, with a much clearer view presented of the time-streaming chamber, showing it to be a similar structure to the Chronoplast albeit on a much smaller scale. 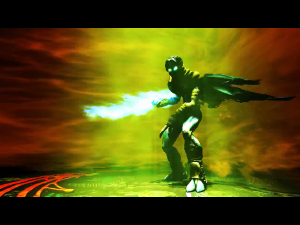 With Moebius's revelations Raziel realized he had been transported back to the Pre-Blood Omen era, but had also been moved to a different location, arriving in a time-streaming chamber within the Sarafan Stronghold, just off the Circle's gathering-room. Encouraged by Moebius, Raziel left the stronghold and ventured out into Nosgoth, but not without noting a second time streaming chamber off the gathering room that bore a Light Crystal locking mechanism.[SR2-C1]

Discovering evidence of Nosgoth's ancient history, Raziel found the Light Forge and enhanced the Reaver accordingly, allowing him to use its enhancements to re-enter the stronghold in Chapter 5. Using the Light Reaver, Raziel was able to unlock the second time-streaming chamber in the gathering room, where he was met by Moebius and persuaded him to send him back to Nosgoth's early history via the time-streaming chamber. When Raziel emerged however, he discovered that he had been tricked by Moebius and instead sent to the demon-infested Post-Blood Omen era. With no understanding of the device to set it himself, Raziel was forced to find another way back into the past.[SR2-C5] 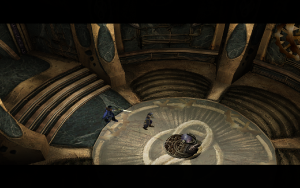 As Raziel investigated the Swamp in this era, he noted a third time-streaming chamber (which he had seen previously in the Pre-Blood Omen era) marked by a cracked door decorated with the infinity sign and realized that it was his only way to escape the Post-Blood Omen era.[SR2-C5] Finding his way to the Air Forge in Nosgoth's northern mountains, Raziel was able to imbue the Air Reaver and use its ability to blast apart cracked surfaces to enter the abandoned chamber in the swamp. Once again unable to set the time-streaming chamber himself, Raziel was forced to use as it was, discovering, somewhat warily, that the device had already been set (presumably by Moebius) to take Raziel to Nosgoth's early history,[SR2-C7] where he would finally meet Janos Audron and face his 'terrible destiny'.[SR2-C8][SR2-C9][SR2-C10]

When seen briefly at the finale of Legacy of Kain: Soul Reaver, the first time streaming chamber is largely depicted as a darkened room and few features can be identified beyond a large ringed infinity symbol, apparently carved into the stone floor of the chamber.[SR1][SR1-10] With the recap of these events in the Soul Reaver 2 Prologue, the chamber is once again indistinct, though this time obscured by the effects of the chambers usage. Differing views of the cutscene prevent the infinity sign from being seen and the floor of the chamber is no longer stone but appears as a semi-transparent material beneath which several gear-like mechanisms can be seen.[SR2][SR2-C0] 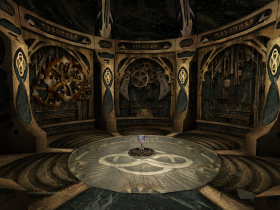 From the start of A Reaver in Time the first time-streaming chamber is seen much more clearly, revealing the room as large circular chamber. The ringed infinity sign remained in the center of the chamber beneath a semi-transparent material accompanied by several gear-like mechanisms and a smaller ring at the heart of the infinity sign itself. Beyond the larger central ring, the room was divided into six sections by small green and golden pillars emblazoned with the infinity sign. Each division had several 'waving' groves on the floor radiating out towards the walls which bore several gear-like mechanisms - three equally spaced walls contained identical mechanisms with a small gear wheel and two blade-like implements, whilst the remaining walls contained two large gear wheels, a set of 'wiring' and the main door of the chamber respectively. Several runic symbols decorated the chamber, with two sets of vertical rune symbols (identical to those seen in Kain's magic meter in Blood Omen: Legacy of Kain) flanking the main door, and a set of translatable Blood script (reading "Wendeler's monument") was repeated around the top of the chamber. Above the blood script ring, the division pillars trailed upwards into stylized golden spikes, between these the roof was a black expanse, through which many star-like lights could be seen flowing away from the center of the roof.[SR2][SR2-C1] 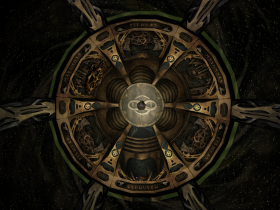 The other time-streaming chambers in the gathering room and the swamp were largely identical to the first with only minor feature changes due to cutscene events, identical textures and no changes apparent due to the passing of time. Perhaps the most noticeable of these changing features was the spherical activation 'switch' on an ornate pedestal at heart of the chamber, which was present only when Raziel would activate the chamber himself, and was thus only seen in the stronghold's second chamber in the Pre-Blood Omen era[SR2-C5] and the swamp's chamber in the Post-Blood Omen era[SR2-C7] - on both occasions, the switch was missing in the same chamber when Raziel arrived in the new era. The other changing feature was a small 'control panel' on the back wall of the chamber (underneath the 'small gear and blades' mechanism), consisting of a semi circular panel decorated with a gear-like motif and another infinity sign, along with several screw-like implements apparently used for inputting the destination of the chamber itself - this mechanism was only seen in the stronghold's second time-streaming chamber in the Pre-Blood Omen era (where it was used by Moebius to program the device to send Raziel to the Post-Blood Omen era) and was not present in the other rooms or in other times.[SR2-C5]