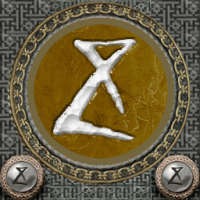 The Time symbol, as depicted in the Vampire Citadel.

The Guardians of Time held dominion over past and future, and controlled time travel.[BO1-C11][DC-SKFAQ] Their role granted them the power to bend time, and forecast or manipulate Nosgoth's history.[DC-SKFAQ][SR2-Official] Time Guardians were afforded "a certain level of omniscience," and kept the flowing currents and shifting movements of the time-stream in check.[SR2-C1][1]

"My role as Time Guardian affords me a certain level of omniscience, Raziel.
No, you don't kill me. That honor belongs to your maker, Kain, some thirty years from now."
―Moebius — Listen (file info)[src]

Only two Guardians protected the Pillar of Time during its existence: the original Time Guardian, an ancient vampire; and Moebius the Time Streamer, a human.[DCab-DCab2014][DEF-C10][BO1-C9]

The original Time Guardian was appointed to serve at the summoning of the Guardians.[DEF-C4] Upon her death, the Pillar of Time culled her successor, Moebius, from the populace. He and Mortanius, the Death Guardian, were among the first human Guardians in Nosgoth's history.[DCab-DCab2014][BO1-C9] Moebius remained incumbent until the corruption and collapse of the Pillars, after which no new Guardians could be born to assume the vacant role.[BO1-C11][SR2-C2] 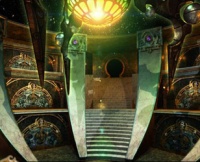 Pillar Guardians were destined to serve their Pillar for their lifetime, and were granted longevity and extraordinary powers in return. Time Guardians could bend time and manipulate history.[SR2-Official]

Each individual Guardian was linked to their Pillar by a Pillar token.[BO1-C3] Moebius's Hourglass bound him to the Pillar of Time. The artifact "was the focus of his Time Streaming magic," and "allowed him to sift through the sands of time, giving him dominion over past and future." In the Blood Omen era, after killing Moebius, Kain – the Balance Guardian – was able to briefly restore the corrupt Pillar of Time by returning the Hourglass.[BO1-C11][BO1-Misc]

The principle of Time governed the elemental power of Earth together with its sister principle, Energy. The original Time and Energy Guardians were entombed in the Vampire Citadel's Earth Forge, and their specters presided over the Forge until the Blood Omen era. Raziel defeated both, and absorbed their souls with the Wraith Blade to acquire the Earth Reaver.[DEF-C10]

Moebius created the Chronoplast – a giant time machine – and other time-streaming chambers and devices to travel to various eras of history.[OPM-SR2-Funk] The Chronoplast enabled advanced minds to see the time-stream. However, only the Time Guardian could take in its weavings without prohibitive difficulty; normal men would go mad.[DCab-DCab2012][DCab-DCab2013]

The Time Guardians' knowledge of past and future was, to an extent, subjective. Both the original Time Guardian and Moebius knew of the prophecies of the Scion of Balance, the Vampire champion, and the Hylden champion, but their interpretations of events differed.[DCab-DCab2012]

Other abilities closely associated with the role included Moebius's capacity to summon "puppets" from various eras, and the original Time Guardian's Time Distortion and Time Singularity.[BO1-C11][1]

Soul Reaver 2's designers considered including a Time Glyph spell for Raziel – alongside eight other Glyphs representing the Pillars – but abandoned the idea during production.[IGN-SR2-Director][EGM-SR2-Kaintinued][2] The Time Glyph may have emulated one or more of the Time Guardian's powers, and was perhaps related to the Time Reaver which subsequently appeared in Defiance.[2][DEF]

Defiance revealed that, after being killed by Kain, Moebius was resurrected by the Elder God, shortly after the collapse of the Pillars.[DEF-C13][TLW-Amy] This incident calls the duration of his tenure into question. Having been revived after his Pillar token was returned, he is unique among Guardians; it is unclear whether his link to the Pillars persisted into his short second life. Dark Chronicle's Ardeth Silvereni notes that the loss of his Time Guardianship may explain "the crack in [his] omniscience" at the end of Defiance – "why he didn't forsee Kain's survival."[DEF-C13][3] Series art director Daniel Cabuco, however, attributes this to Kain's momentary banishment to the Demon Realm: "a place neither the Elder or Moebius could see into. Since he blipped off their radar, they assumed he was dead and didn't look for him. They had a hard time keeping track of him in the first place."[DCab-DCab2013]