"We are hurtling toward our destinies, Raziel. What you feel is the pull of history rushing to meet us. This is where history and destiny collide."
―Kain[src]

A timeline (historical timeline), in the Legacy of Kain series, was an iteration of Nosgoth's full chronological history, or time-stream. The concept of fatalism is a reality in the metaphysics of Nosgoth; with the exception of Raziel, its inhabitants did not possess free will, and their futures were predestined. Time was therefore usually immutable, but it could be altered by historical paradoxes, when a Reaver-convergence took place.

If two incarnations of the Soul Reaver met in time and space, "a temporal distortion powerful enough to derail history" could be the result. When such a paradox blocked the time continuum, forcing Nosgoth's history to reshuffle itself to accommodate the contradiction, the current timeline effectively died, and a new one was spawned. Four distinct timelines have been observed in the Legacy of Kain series, each one subtly or significantly different to the last, and each remembered by both Kain and Moebius. 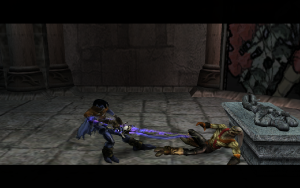 The pull of history attempts to force Raziel into slaying Kain.

The time travel model utilized in the Legacy of Kain fiction was conclusively developed and explored in Soul Reaver 2, and borrows from Terry Gilliam's 1995 film 12 Monkeys (which adheres to the Novikov self-consistency principle), but is slightly different: it includes a loophole. Series developers Amy Hennig, Jennifer Fernández, Richard Lemarchand and Kyle Mannerberg outlined its core principle as "you can't go back in time and change history because you didn't".[1] Hennig's full interpretation of the concept was described in an interview:

"Is it impossible to escape preordained fate? And it's interesting to layer this quesiton into a time travel story. This is really the whole crux of the time travel concept - can you change history or not? And if so, what does it mean to change history - in terms of being responsible for the repercussions? I did some research into time travel fiction, in preparation for Soul Reaver 2. For me, the most interesting approach in time travel stories is summed up with the statement: 'you can't go back in time and change history because you didn't'. That's my favorite way of looking at it. If you do go back - then you did go back. Which means that time travel is ultimately a journey of epiphanies, where the protagonist realizes the role that he already played in history. Of course, Blood Omen established that history can in fact be changed - and we'll be respecting this precedent in Soul Reaver 2."
―Amy Hennig[2]

"Initially, Raziel naively believes that history is fragile and may be altered easily. He gradually comes to understand, however, that there's a 'conservation of reality' at work, and that history is essentially immutable--that it requires a kind of 'temporal wildcard' to change its course. Raziel ultimately realizes that his comprehension of Nosgoth's multilayered, twisted past is much more limited than he initially believed. He also discovers that he continues to be manipulated by others who understand Nosgoth's history--and the nature of time--better than he does."
―Andrew Bennett[3]

Nosgoth's time continuum was extremely rigid and resilient, and did not normally allow for the introduction of paradoxes: the map of each individual's destiny was fully outlined and immutable, accommodating for time travel events and preventing contradictions.[SR2-C5] Even to characters who knew the future and were aware that "free will is an illusion", resisting history was usually an impossibility: they did not possess the intrinsic free will necessary to defy "the rules of fate and predetermined events".[SR2-C1][4] This theory of predestination was a fundamental, indiscriminate constant, and applied to almost all entities within the Material, Spectral and Demon Realms alike.[4] 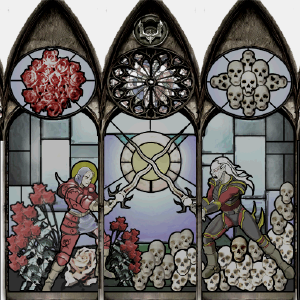 Kain and William battle with two incarnations of the Soul Reaver.

The only "unbound creature" within Nosgoth was the wraith, Raziel, who could make choices freely, unhindered by the predestination others were subject to.[SR2-C5][DEF-C11][DEF-C12][5] Only vague descriptions as to why he was singular in this regard were afforded: his free will was usually attributed to "his remaking into the world" at the hands of the Elder God, and his resultant liberation from the Wheel of Fate.[1][4][DEF-C11] It may also have been connected to his destiny to become the captive, soul-devouring entity within the Soul Reaver, and to later wield a future incarnation of his own soul - the Wraith Blade; the meeting and constant presence of two incarnations of the same soul-devouring entity, crucial to the timeline, in close proximity - and the very possibility that one might attempt to devour the other - may have contributed to his unique exemption.[SR2-C10]

On the rare occasions where two incarnations of Raziel's soul met, in either the forms of the Soul Reaver or the Wraith Blade, a Reaver-convergence was the result: "reality itself" would tangibly warp and bend slightly, creating a sense of vertigo, or displacement.[SR2-C5][SR2-C10][6][SR2-C1] At such points, there was a window of opportunity in which it was possible to create a paradox, potentially sufficient enough to derail history and rewrite the timeline.[SR2-C5][SR2-C10][BO1-C11] Kain analogized these junctures to the flipping of a two-sided coin: "suppose you throw a coin enough times... suppose one day, it lands on its edge".[SR2-C1]

Only relatively slight diversions could be triggered; most major events remained constant in Nosgoth between each timeline. If a paradox blocked the time continuum, history would always follow "the path of least resistance while admitting only the slightest alterations". Defying the force of history was always a dangerous gamble - "if events [could not] be reshuffled to accommodate the change", the irritants responsible for the contradiction would simply be expelled from the time-stream.[SR2-C5] Such a fatal paradox did not overtly happen in the Legacy of Kain series, but the concept served as a looming danger which Kain and Raziel were forced to acknowledge and remain wary of.[SR2-C5][SR2-C10] 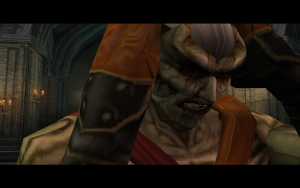 Kain's memories are reshuffled as the continuum of history is derailed.

Parallel or "forked" versions of history did not exist in Nosgoth - only the current iteration of history was considered "real". If a historical paradox occurred and a timeline was derailed, the derailed timeline was considered to be "dead", and could never be revisited. Timelines did not split or actively co-exist, and a new one could only be spawned if the current one was subject to a paradox and derailed.[4][7]

Previous variations of history which were dead, however, are still considered part of Legacy of Kain's continuity; certain individuals retained full memories of previous timelines. As evinced throughout Soul Reaver 2, Kain remembered all four timelines observed in the Legacy of Kain series, likely because he was present at the point of the three paradoxes observed. When a paradox occurred, all of his old memories and experiences up to that point remained intact in his mind, but were also "shuffled aside by the newer memories that reflect the altered course of history". Kain was aware of four variations of his own past as of Legacy of Kain: Defiance.[4][SR2-C5][SR2-C5][SR2-C10]

Raziel, who was similarly present and conscious at two of the paradoxes, was also aware of the alterations which concerned him.[SR2-C5][DEF-C2] Moebius (and, presumably, other Time Guardians) inherently knew if, and exactly how, history had reshuffled itself, even when he was not present during a paradox; the only entity whose actions he could not account for was Raziel.[SR2-C5][DEF-C3] However, all other individuals within Nosgoth who were not present at the heart of the paradoxes - including even the Elder God - appeared to be ignorant of the changes in the time-stream, and never demonstrated the same knowledge of alterations to their destinies.[BO1][SR2][DEF]

Nosgoth's history was altered three times throughout the Legacy of Kain games. As such, four timelines have been observed in the series, two or more being explored in both Blood Omen: Legacy of Kain and Soul Reaver 2. They are not formally named in official sources, and can only be identified by the order in which they came to exist.

Following the precedent set by the official timeline included with Soul Reaver 2, Nosgoth's timelines can be divided into six witnessed eras, progressing in descending chronological order:

The full span of known history in Nosgoth comprises a minimum of 5500 years, judging from comments made by Janos Audron in Soul Reaver 2 and Blood Omen 2.[SR2-C8][BO2-C9]

It is known that Nosgoth has a recognized epoch, but it cannot be properly integrated with a timeline from the limited information available. In Blood Omen 2, a building in Meridian's Lower City is accompanied by a sign reading "Hill House est. 1246". This is the only time a reference date has been presented in the series, and it is unknown where the year 1246 should be positioned in relation to the games, or how it corresponds to the timeline as a whole.[BO2-C3]

In Legacy of Kain: Defiance, the Hylden Lord declares that the collapse of the Pillars signifies the beginning of a new epoch, but this event takes place only 400 years before Hill House is encountered in Blood Omen 2 - far too soon to relate to the year 0 under the Hill House sign's reckoning.[DEF-C11]

Chronology of the series[edit | edit source]

These tabs allow the known events of each timeline to be viewed and compared in descending chronological order. They are accompanied by a default "narrative order" setting, which omits unseen details to outline only the witnessed actions of Kain and Raziel in the order the narrative of the series presents them, rather than as a historical chronology. The icons of the games and comics function as tooltips; when hovered over, they indicate which chapter of which game, or which comic, a given event can be observed in.

Almost all significant time-spans in the Legacy of Kain series consist of round numbers, usually presented as rough approximations (in terms of years, decades and centuries), so all numerical dates are caveated with a tilde (~), meaning "approximately".

Continuity between the timelines[edit | edit source]

From the games alone, it is not possible to determine the full extent of the changes incurred by each paradox (and, hence, the exact nature of the differences between each timeline). However, some facts can be ascertained:

Soul Reaver 2 establishes that history admits only the slightest alterations to the timeline possible, so it can probably be assumed that many events and elements between the four timelines witnessed are consistent between the paradoxes, even though only limited information is available to confirm the full extent of this persistence in canon. The fourth timeline is the most comprehensive and coherent version of the history of Nosgoth, prospectively including events witnessed in all of the Legacy of Kain games and media.

The following table attempts to outline which of Nosgoth's major events remained constant between the timelines. "No evidence" suggests that there is no information to determine whether an event occurred or not in a timeline.