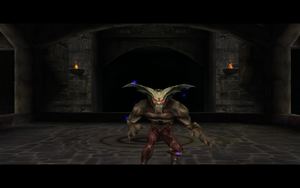 The Tomb Guardian, also known as Morlock, was Revived Adult Turelim Vampire sent by Kain to guard the Tomb of the Sarafan. He was featured in Soul Reaver.

The Tomb Guardian is a Revived Vampire, implying that at some point in his lifetime he was 'killed' and spent some time in the Spectral Realm as a Vampire Wraith before being brought back to the Material Realm. Interesting fact is that there are more revived Turelim so it is not clear why Morlock is a special vampire which grants the force projectile.

The Tomb Guardian is the only "regular" vampire in the game which needs three hits from the Soul Reaver.

The dialogue that was used by the tomb guardian was originally meant for Turel in an original version of Legacy of Kain: Soul Reaver.

The tomb guardian is often known as "Morlock" by fans because during development of Soul Reaver, the vampire brothers were given codenames according to their abilities and Turel's was 'Morlock' (much like the villains in H.G. Wells 'The Time Machine') and as presumably the highest ranking Turelim seen in the game, the Tomb Guardian inherited the name. The "Morlock" name was first used to refer to the Tomb Guardian in a preview in Official PlayStation magazine and subsequently became associated with the character. Despite this, later official sources refer to the character as the "Tomb Guardian". In Debug menus the term "Morlock" is used to denote the area between the Ruined City and the Oracle's Caves, presumably relating to the entrance to the Turelim clan territory which was intended to be located there.

Several screenshots and footage from trailer depict a prototype Melchahim vampire on the platform, so it seems that Morlock was added as a means to get a projectile separate from the wraithblade and as a substitution for Turel. In the Soul Reaver Early Beta, the Reaver is already equipped with projectile ability and Raziel needs to devour his soul to get the projectile on his own. This mechanic was changed into Raziel acquiring the Force Glyph in the later Beta to the final version, where Raziel gets a relic.