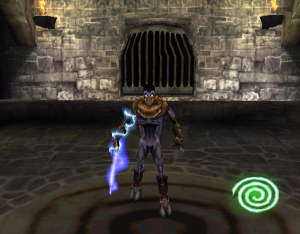 Tomb Guardian room is the arena where Raziel fights Morlock. The room consists of a platform in the middle surrounded by water and there are pillars in each corner supporting the beams above. The middle of the platform has an image of three circles placed in its centre.

The room has three exits and Raziel can only enter through the Sarafan Tomb inner sanctum at first. Once he defeats Morlock, a new exit opens up, allowing him to return to the entrance of the Sarafan Tomb. The third one must be unlocked manually by using the force projectile ability on the block in the wall. 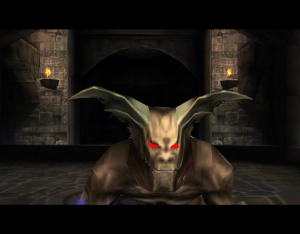 It is possible that this room is very similar to Turel´s chamber, just on a smaller scale. Since dialogue with Morlock is a mere modification from the one with Turel, it is interesting to note that Turel was supposed to die by falling into a water pit, just like Morlock can in the final release. Though on Morlock, Raziel can also use the Soul Reaver if he is agile enough to avoid Morlock´s attacks.