"The ancient tomb of the Sarafan, once impenetrably sealed... Now, ravaged by Nosgoth’s upheavals, its mysteries lay exposed.
In the time of Vorador, centuries before Kain was made, the Sarafan warrior priests waged a merciless war against the vampire tribes of Nosgoth. Emboldened by righteousness, they committed unspeakable and indiscriminate acts of violence - massacring fledglings and ancients alike, they decimated entire bloodlines in mere decades. Now their husks lay here - murderers enshrined."
―Raziel — Listen (file info)[src]

The Tomb of the Sarafan was where the Sarafan warrior-priests Raziel, Turel, Dumah, Rahab, Zephon and Melchiah were buried, following their deaths at the hands of the time travelling wraith Raziel. There was also a named place in the tomb for Malek, although his body was never entombed there.

A thousand years after their burial, Kain broke into the tomb, and resurrected the six Sarafan as his Vampire lieutenants.

The wraith Raziel discovered the tomb in Soul Reaver. He had no memory of his human life as a Sarafan, and was shocked to uncover his past: it was the antithesis of everything he had believed as Kain's firstborn vampire son. 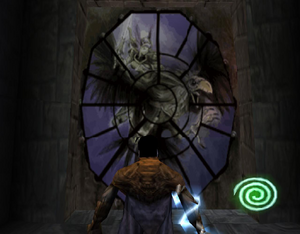 There is a picture of a long-haired blonde woman (presumably) in armor riding a giant bird type creature and holding a sword. What this mural is meant to portend is unknown.