The Turelim are a clan of vampires first encountered in Legacy of Kain: Soul Reaver and revisited at an earlier stage of evolutionary development in Nosgoth. They are the descendants of the lieutenant Turel.

The primary territory of the Turelim is not seen in Legacy of Kain: Soul Reaver. The Turelim are encountered in the Lighthouse area, the Oracle's Caves and the Chronoplast, and one - the Tomb Guardian - is inside the Tomb of the Sarafan.

As with all the clans seen in Legacy of Kain: Soul Reaver, the Turelim are split into two distinct active types: the older, stronger and more evolved adult Turelim, and the younger, weaker and less evolved fledgling Turelim. No members of the clan are encountered in their inactive pupating state.[1][2] For their return in Nosgoth a less devolved Tyrants|Tyrant variant class was among the initially available classes.

The Turelim vampires were progeny of Turel, who personally raised his clan during the Soul Reaver era, over the century following the Raising of the lieutenants at the Tomb of the Sarafan.[SR1-C6][1][2][3] Alongside the Dumahim, Melchahim, Rahabim, Razielim and Zephonim, it was one of the "six legions of vampires" involved in "the destruction of the major human Kingdoms"; pillaging Nosgoth, they had thoroughly domesticated humans within a hundred years, despite the efforts of the Vampire hunters.[1][2][3] Turel's clan dominated an area in territory east of the Lake of the Dead and south-west of the Oracle's Cave. In the millennium after the raising of the lieutenants and establishment of Kain's empire, the "lesser vampires" provided "amusement and spice to an increasingly uninspired court"; and presumably the Turelim clan were involved in these internal struggles. The Council would help and foil plots between the clans, betting upon the outcome as the factions warred.[1][2][3] 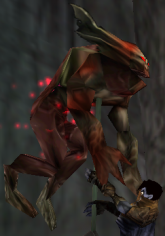 After Raziel's execution and Kain's abandonment of his empire, The Turelim vampires were one of the clans that took part in the Vampire civil war as the empire fragmented and later the Tyrants|Tyrant class Turelim would participate in the subsequent War for Nosgoth against the resurgent human threat in the mid Soul Reaver era, becoming feared as the most muscular, powerful and strongest of the clans.

After Raziel returned as a wraith centuries later, he would encounter the devolved Turelim as enemies. They were the most powerful existing vampires in the land of Nosgoth during the course of the game (with Turel apparently replacing Raziel as Kain's second-in-command), appearing the most muscular and physically strongest vampires in Nosgoth. Their most striking feature was their enlarged ears which made their hearing more sensitive, though this was only effectively demonstrated was against the patriarch of the clan, Turel, who was susceptible to sound. They all have large claws and retain their humanoid trousers but sport a bare chest with a collar.[1][2][SR1][SR1-C6][SR1-C9][DEF][DEF-C10]

In close combat, they were the most dangerous foes, with quick and powerful strikes, fast movement and prepared dodges, hard to stun, and short stunning times. Turelim could be particularly devastating if allowed to team up on Raziel. When not in battle they can be observed roaming about their business, or just guarding specific locations.[4][SR1][SR1-C6][SR1-C9]

Like their fellow vampires, the Turelim clan carried the blood curse, blood-thirst, immortality and sterility inflicted on their ancient vampire ancestors by the Hylden, during the vampire-Hylden war, and developed the yellow or amber irises and tridactyl claws and feet characteristic of their race.[DEF-C4][DEF-C6][5] They were created from reanimated human corpses, restored to unlife with the infusion of souls, and "gain[ed] their advantage from the powers of the underworld".[1][2][3][6] 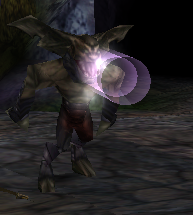 As a result of Nupraptor's corruption - which was passed on to all of Kain's descendants - the Turelim clan devolved and pupated as the centuries passed,[7] "becoming less human and more... divine".[SR1-C1] With Turel the second lieutenant raised he inherited the strongest portion of Kain's soul after Raziel, and his descendants were among the most powerful vampires in Nosgoth, particularly noted as the "physically strongest" of the clans even before the downfall of the Razielim[8] and were described definitively as "the most powerful vampires in Nosgoth" after.[1][2]

Even in early stages of development Turelim vampires possessed "latent telekinetic powers" which they used to "augment their already impressive physiques, making them capable of truly inhuman feats of speed and strength.".[9] Later in their evolution they developed the ability to fire Telekinetic force projectiles which made them exclusive among Kain’s sons to inherit the gift of manipulating objects from a distance. Visually, the Turelim seem to create their telekinetic projectiles by opening their mouth and lowering their hands in a vertical posture - in contrast to the telekinetic abilities later seen in use by Raziel and Kain which were fired from the hand. The Tomb Guardian, a revived adult Turelim also had in his possession an artifact that granted non gifted individuals the power to do the same. The projectile itself is a set of concentric circles surrounded by a colorless orb of space compression with a light blending phenomena. This made the Turelim one of only two clans capable of ranged attacks, along with the water-firing Rahabim.[SR1][SR1-C6][SR1-C9]

Clan Leader Turel was only seen in the opening videos of Legacy of Kain: Soul Reaver[SR1-C1] and he and his clan territory were ultimately cut from the final game[10][11] (though Turel would later appear in Legacy of Kain: Defiance[DEF][DEF-C10]). The most senior representative of the clan seen in Soul Reaver was the Revived vampire, The Tomb Guardian, who was tasked with protecting the Tomb of the Sarafan[SR1-C6] and whose dialogue was adapted from the dialogue planned for Turel.[10]

Besides these characters, two major variants of Turelim vampire were seen in Legacy of Kain: Soul Reaver - Fledglings and Adults. A few Turelim vampires could also be discovered in a revived state. For Nosgoth, set much earlier in the Time-stream, a different less devolved variant of Turelim called the Tyrants were seen, though an Evolved Turelim skin was available which evoked their devolved forms from Soul Reaver.

Tyrants were the class of Turelim encountered in the mid-Soul Reaver era War for Nosgoth. They were the largest and most powerful of the Vampires of the time and were a dangerous threat to the Humans.

Fledgling Turelim were the younger, less evolved members of Turel's clan, and the lesser Turelim enemies in Legacy of Kain: Soul Reaver in contrast to Adult Turelim. As with other clans, Turelim fledglings were devastated by the touch of Sunlight and even the weak rays of Nosgoth’s daylight in the Soul Reaver era, which is filtered by dense smoke. The young Turelim also have darker skin, with more prominent muscles. [1][2][SR1][SR1-C6][SR1-C9]

Adult Turelim were the older, more evolved members of Turel's clan, and a greater threat compared to the fledgling Turelim. As adults, these Turelim could walk through areas of Nosgoth’s smoke filtered daylight without danger of being burned by the weak sunlight. The eyes of the adults are glowing with a red color and they had smoother and lighter skin.[1][2][SR1][SR1-C6][SR1-C9]

The Pupating methods of the Turelim were not observed in game, however lead artist Daniel Cabuco confirmed that the original designs for the Turelim clan territory would have featured the Turelim vampires in "Eggs like Zephon, which you would have to crawl by not to activate."[12]

The Turelim clan territory was not visited during the course of the game, but was originally planned to appear as the penultimate playable locale in Legacy of Kain: Soul Reaver. The level was removed along with several elements of the original story-line at some point in development, due to timing and budgetary issues, but it is widely accepted that it was to originally be reachable through a cave opposite of the entrance to the Chronoplast with the also cut Shift-at-Will spell.[10][11][13] 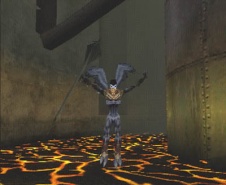 prerelease imagery of Raziel in the removed Turelim clan territory, nearby the Smokestack

The Turelim territory was to be towards the north-east and was believed to have been the industrial heartland of Soul Reaver era Nosgoth, with many furnaces and what appear to be rivers of magma. The Territory also contained the the Smokestack seen briefly in the opening video to Legacy of Kain: Soul Reaver and it was this smokestack that belched smoke into the sky for Kain’s empire, and made most adult vampires capable of walking out into the weak filtered daylight. After defeating Turel in the territory and gaining the Amplified Force Projectile (the same ability attained upon Turel's demise in Legacy of Kain: Defiance), Raziel would have used an updraft from the top of the smokestack to glide to Kain's Mountain Retreat.[14][15][10][11]

As their homeland is not shown, they can be encountered in the Chronoplast and Oracle's Caves, probably ordered to guard it by Kain, in the tunnel system between the Tomb of the Sarafan and the Anchored Ship inside a room with some holding pen and murals up high, and one right under the Tomb of the Sarafan itself. Other than these places, they own the single most elaborate place in Nosgoth to house a structure not related to the main plot, the Lighthouse area and the nearby Sunlight glyph shrine.[SR1][SR1-C6][SR1-C9]

Turel's clan territory was briefly mentioned in the background story for the Turelim Tyrants of Nosgoth - explaining that in the early Soul Reaver era, shortly after the fall of the Major human kingdoms, the territory was chosen as the location to build the first Smokestacks - huge volcanic furnaces designed to blot out Sunlight.[9]

Artist Daniel Cabuco noted that in Kain's empire prior to Raziel's execution and their devolution, the Turelim had taken roles described as:

and it was further elaborated that:

"Turelhim (sic) would would be learning how to hone their Telekenesis on poor captured souls."
―Daniel Cabuco[16][8]

It was also noted that the clans were not numerically even and this would create conflict between the clans towards the end of the empire:

"Melchaihim(sic) would outnumber Turelheim(sic) 3 to 1, but as far as abilities go, that would make them even. Towards the end of the empire, humans and their blood would be used as trade and currency since the supply was rapidly dwindling. Fights would ensue over supply (Turelim would kill off Melchiahim(sic) because their number was thinning the human cattle too quickly)."
―Daniel Cabuco[8]

Other official sources note them as "dutiful" and "arrogant", seeing "ruling oppressively through force and fear [as] perfectly natural and they take pride in doing so".[9] Some sources specifically note that Turelim vampires were (or saw themselves as) the "servants of Kain".[4][SR1-C6][17]

Several designs exist of alternate versions of each of the clans at early stages of development in Legacy of Kain: Soul Reaver. It would appear that the Turelim were initially designed as much more human-like in appearance with stretched arms and a spiked nose, but these design were eventually discarded in favour of the forms seen in the retail game.[18]

For their redesign and adult appearance in Nosgoth, Daniel Cabuco noted:

"Devolving into a more feral state, fat and sinew give way to raw muscular power. The Tyrants of Turel begin the growth of their trademark ears and thick graying skin wrapping tightly around their massive shoulders."
―Daniel Cabuco[19]

"For the Turelim, the trademark ears and jaws are enlarged, showing an in-between state of the Tyrants. Their massive barrel chested bodies are starting to emaciate in the abdomen, now devoid of fat. The arm wraps, a trademark of their power, are bolted into the rhino-like skin they have developed. Leathers, brass and coppers now comprise their materials (so stained with dried blood that they have started to turn brown). The silhouette now pushes towards what fans will recognize as a Soul Reaver Turelim."
―Daniel Cabuco[19]