Kain was able to encounter Turo as he enteredthe Canyons at the beginning of Wild Places[BO2]. Turo was apparently leaving Meridian to deliver supplies to the "garrison beyond the abode of the witch".[1] Turo and a Sarafan Knight conversed as he entered the Canyons, confirming his "name and business".[1] Turo was warned about the bridge to the settlement having fallen and he used the opportunity to criticise Sarafan tolls and maintenance efforts. The Knight advised Turo that a "company was being sent out" [1](not to deal with the Smugglers but a "worse danger" in the Canyons) and cautioning Turo to "hold his tongue" regarding the Sarafan, the Knight opened the gates and Turo headed into the Canyons[BO2]. 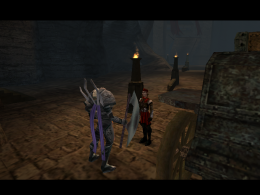 Turo discusses his business with a Sarafan Knight 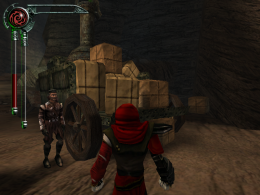