"Vae victis," often misspelled "Vae Victus," was uttered in Blood Omen: Legacy of Kain and Legacy of Kain: Defiance. It was an ancient tongue (Latin) phrase alternately translated as "suffering to the conquered" or "woe to the conquered," and the battle cry of the vampire Kain.[BO1-C1][DC-SKFAQ][DEF-C12] 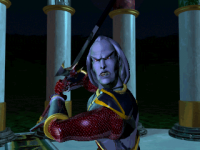 Kain screams "Vae victis" as he faces the Dark Entity.

In Blood Omen, Kain typically cried "Vae victis" when delivering maximum damage with his combo attacks – for instance, his triple-swing combo with the Iron Sword.[BO1-Misc][DC-SKFAQ]

Kain also invoked the phrase at the beginning and the end of his odyssey to restore the Pillars of Nosgoth.[BO1-C1][BO1-C11] Painfully transfixed in the Underworld after his assassination, he explained that it meant "suffering to the conquered." Here, he acknowledged the irony that his favored motto now applied to him, suffering and conquered alike.[BO1-C1] Later, when confronting the Dark Entity, he screamed the words in anger as he attacked.[BO1-C11]

"Vae victis" made an eventual return in Defiance, again featuring as Kain's battle cry. He occasionally spoke the phrase while feeding the Reaver, punctuating his victories in combat.[DEF-Misc][1]

When Kain encountered and fought Raziel in Avernus Cathedral, Raziel ironically turned the old idiom against Kain at the climax of their battle. He uttered "Vae victis" as he tore the Heart of Darkness from Kain's chest, crying "woe to the conquered" in triumph over his defeated foe.[DEF-C12]

In the real world, "Vae victis" is a Latin expression translated as "woe to the conquered." The phrase finds its origin in an anecdote concerning the 4th century BC Celt leader Brennus, who led an attack on Rome. Dark Chronicle's Ardeth Silvereni relays the story:[1]

"The Romans offered to pay the Celts a sum of gold if they would leave, and the Celts accepted. While the gold was being measured, some Roman officials accused the Celts of using unfair weights to cheat, and take more gold than had been agreed. Apparently, the Celt leader then added his sword to the scales - saying 'Vae Victis' - reminding them that they had been beaten and couldn't complain. The Romans had no choice but to add enough gold to balance the Celts' weights and the extra weight of the sword."
―Ardeth Silvereni[1] 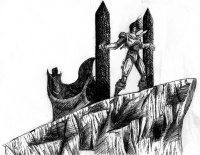 Suffering to the conquered: concept art of Kain trapped in the Underworld.

"Vae victis" was added to the Legacy of Kain mythos by D. G. Chichester, a contributor to Blood Omen's story. Series creator Denis Dyack reflected that "once [Chichester] suggested this as a battle cry we knew it was perfect for Kain."[Misc-Usenet] After its release, Silicon Knights admitted that the phrase was mispronounced in the game.[DC-SKFAQ][Misc-Usenet] Dyack explained that they could not find anyone to confirm which was the authentic form, and simply chose to use the take which they felt sounded the best. He said, "I believe [Kain voice actor Simon Templeman] did get it right in one of the takes. We just never used it because we didn't know better."[Misc-Usenet]

The official Blood Omen scripts, publicly released by The Lost Worlds in 2012, reveal that the human Kain was planned to scream "Vae victis" in dialogue for the deleted assassination cinematic.[BO1-Cut][2][3] An alternate take of the phrase exists, unused, in the game's files, but its position in the data implies it was intended for the Battle of the Last Stand.[BO1-Cut][4]

"Vae victis" is conspicuous in its absence from Blood Omen 2.[1][5] Templeman recorded two new takes of the battle cry for Crystal Dynamics – one in its Blood Omen form, and the other in a different style – but both remain unused in the game's data.[1][5][BO2-Cut] Ben Lincoln of The Lost Worlds speculates that "perhaps when Blood Omen 2 was made, a pronunciation couldn't be decided upon."[5] Defiance ultimately remained consistent with the variation originally used in Blood Omen.[DEF-Misc][5]