Valeholm was a town originally intended to appear in the Post-Blood Omen era of Blood Omen 2 before being cut from the title. It was finally introduced to the Legacy of Kain series in Nosgoth, set in the Soul Reaver era, where it appears as a burning village and is positioned in central Nosgoth, north of the Great Southern Lake.

Valeholm was a town appearing in Nosgoth as a playable location. On maps, the town was situated in central Nosgoth in a mountainous area between the Great Southern Lake and the Swamp area known as the Iron Pass.[1][2]

Before the Major human kingdoms were felled by Kain's empire, Valeholm was home to a hardened tribal people who controlled the mountain region and clung fiercely to their independence, not involving themselves in the affairs of the outside world - Vampire or Human. When Kain's armies rose up to take control of Nosgoth, Valeholm's residents were pressured into joining the human cause, but chose to remain neutral as they had in previous generations. This proved to be their undoing as the merciless Vampires swept through the town, conquering all and burning the survivors.A few that escaped the destruction fled to the Hinterlands and formed the Ironguard, determined the same fate would not befall them again.[2]

Centuries later when the Vampire civil war erupted, the Ironguard and the humans took the opportunity to return to The Iron Pass and re-inhabit Valeholm, making it a garrison and base for their planning and operations, hoping to eventually rebuild the town. With the coming of the War for Nosgoth - based on intelligence about Valeholm gathered by Eskandor - the Vampires were quick to recognize the value of Valeholm and sent a task-force to destroy Valeholm completely - intending to repeat history, the vampires set the town aflame as conflict reached its walls once more.[2] 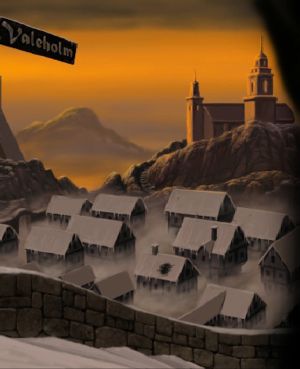 The appearance of Valeholm in Blood Omen 2 concept art

Valeholm was first seen in concept art in the credits of Blood Omen 2 - the town was a deleted level planned to appear in that title but was not present in the finished game and was presumably among many areas which never made it past the concept stage. Ultimately, nothing of the level was seen and it is not known what Kain's mission might have been in visiting Valeholm.[BO2][3]

Like other concept art for Blood Omen 2 Valeholm was initially depicted as covered in snow. It is depicted in concept art as a snow-driven settlement with stone walls and several houses, overshadowed by a church-like building atop a rocky crag. Many other areas of Meridian were also subject to a similar process - being depicted as covered in snow in concept art and the snow being removed before gameplay. It appears that the locales of Blood Omen 2 being snow-driven was an idea that never made it passed the concept phase.[BO2][3]

Perhaps referencing the appearance of the town in Blood Omen 2, lore-blogs for Nosgoth do mention that the inhabitants of Valeholm were "hardened by the winter winds" and "clung on to a harsh existence"; further describing the town as "home to superstition, religion and dangerous ideas of liberty" and mentioning that in the initial assault "those who did not flee brought to the city’s religious centres and burnt alive with their priests in their own pyre churches."[2]