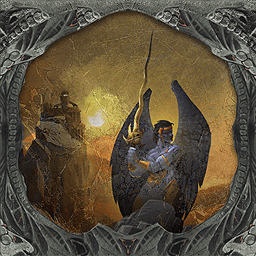 Many vampires such as Kain, and Janos Audron believe Raziel is the Vampire Champion and even refer to him as such. While Mortanius and Hylden believe Raziel is the Hylden Champion. Many believe the Vampire Champion is the savior of Nosgoth and it's redeemer and as such refer to the Hylden Champion as it's destroyer. The truth of the prophecy was that Raziel was both Vampire and Hylden Champions as a result of his free will. As such the prophecy depicts three distinct things, 1. his eventual sacrifice to the Soul Reaver, 2. the fact that he is a conflicted individual, and 3. that Raziel can choose to be either hero. Raziel wields the Wraith Blade which is a different form of the Reaver (and is his own future soul), so Raziel still wields the Reaver. As the Vampire Champion, Raziel purified the Scion of Balance, while also "killing" the Hylden Champion (by being absorbed into the Soul Reaver), while also arming Kain (the Scion) with his prophesied weapon.