Vampire Hunter Cannoneers were a were a Human 'vampire hunter' enemy class affiliated with Moebius's mercenary army. The Cannoneers were armed with hand cannons and were encountered in the Pre-Blood Omen era at the beginning of Soul Reaver 2.

Cannoneers were the ranged-attacking troops of the Vampire hunter faction; in combat, they kept their distance and used their cannons to fire cannonballs at Raziel from long-range. At close-range they had little combat capability (though they could use their cannons as a melee weapon in close-quarters) and little health with quickly charging them and singling them out being an effective tactic[SR2][2][1][3].

Raziel first encountered Vampire Hunter Cannoneers in the Pre-Blood Omen era, shortly after he left the Sarafan Stronghold and ventured out into Nosgoth. They would frequently be encountered throughout that era and were later seen nearby the Shrine area, in the Swamp, and would be present in the Sarafan Stronghold after Raziel returned from forging the Light Reaver[SR2]. 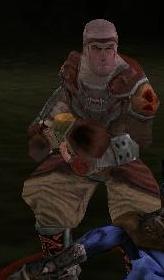