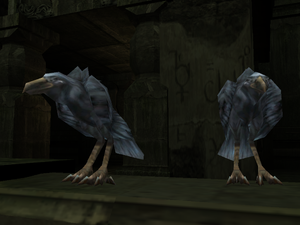 "From the moment of my arrival, I had the constant and palpable sensation of being watched. Someone, it seemed, was keenly interested in my presence here."
―Raziel — Listen (file info)[src]

Vorador's Crows, also known simply as Crows, were a set of mysterious birds which observed Raziel in the early chapters of Soul Reaver 2. They ultimately seemed to be 'agents' of the vampire Vorador. 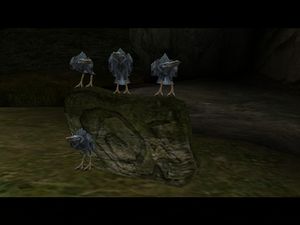 Vorador's Crows when they are first seen by Raziel

After Raziel left the Sarafan Stronghold and explored Nosgoth in the Pre-Blood Omen era in the early chapters of Soul Reaver 2 he was silently observed by a number of small groups of crows. When Raziel approached any of the crows they would appear as though taking off before vanishing into a green wispy energy. Noting a grouping nearby the Pillars of Nosgoth, Raziel commented on the "palpable sensation of being watched" they gave him, deducing that someone was "keenly interested in [his] presence".[SR2][SR2-C1][SR2-C2]

After being observed by the vanishing crows for some time, Raziel eventually made his way to the Swamp where upon hearing a disturbance among the crows he was able to spot a vampire watching him from a balcony along with the crows - with both disappearing into green smoke. Raziel was able to quickly identify the mysterious observer as Vorador. It seemed that Vorador had used crows to keep surveillance on Nosgoth - and more particularly Raziel - this was all but confirmed a short while later as Raziel left the Dark Forge and conversed with Vorador, who admitted to watching Raziel since he left the Stronghold.[SR2][SR2-C3]

Vorador's crows would continue to watch Raziel as he explored Nosgoth in the Pre-Blood Omen era. They would be absent from the Post-Blood Omen era but were seen again in Nosgoth's early history.[SR2][SR2-C3][SR2-C5][SR2-C7][SR2-C9] Later titles did not explicitly feature a return of the concept although regular crows were seen on occasion.[BO2][DEF]