"He has suffered much. He cannot forgive them."
―Janos Audron — Listen (file info)[src]

Vorador's mystery woman is a character who is "part of the backstory" of the Legacy of Kain series, specifically linked to Vorador. Her identity has not been revealed. She has appeared only in portraits, visible in Vorador's Mansion, in both Blood Omen: Legacy of Kain and Legacy of Kain: Defiance.

When Kain traveled to Vorador's Mansion in the Blood Omen era, he discovered the elder vampire in the dining room. Depictions of a dusky-skinned woman with distinctive markings adorning her face could be seen on the walls of the room, one large portrait situated directly behind Vorador's chair. Neither Kain nor Vorador passed comment regarding her, or her identity.[BO1-C6][1]

In another timeline, Raziel traveled to the Mansion in the same era, where he met Vorador, who supported him in retrieving the Heart of Darkness. Raziel could find another portrait of the woman on the wall of the Library, above the fireplace near the exit to Avernus. In this depiction, her eyes were discernibly light blue, and her hair silvery. Like Kain, Raziel did not remark upon it.[DEF][DEF-C8][DEF-C12]

The mysterious woman was first depicted in the cinematic in Vorador's Mansion in Blood Omen: Legacy of Kain; her portraits only appear in the cutscene, and are not seen anywhere in the in-game version of the Mansion.[BO1-C6][BO1] For Legacy of Kain: Defiance, series art director Daniel Cabuco painted a revised version of her portrait for use in the Library.[2] 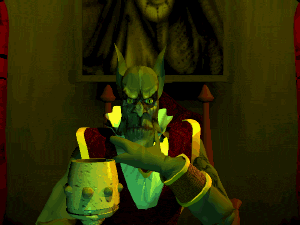 The mystery woman's portrait in the dining room. 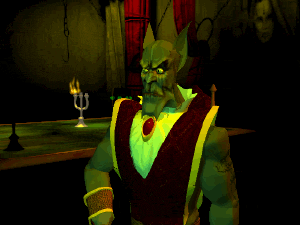 A full view of the woman's dining room depiction.

Following the release of Legacy of Kain: Defiance, fans of the Legacy of Kain series noted that the woman resembled Umah, a vampire sired by Vorador who appeared in Blood Omen 2. However, the possibility that they were one and the same was refuted by series director Amy Hennig, who clarified that the woman is "a character who is part of the backstory and not revealed in the games".[1][BO2-C10]

In 2012, Cabuco revealed much more about the character, indicating that no story had yet been written for her. He said that "initially, we had the ability to create murals and pics in the game, then run them by Amy to make sure they were open ended enough for her to write in a back story if she wanted to include it. It's sort of like a 'hook' what Amy could write in if she wanted. Sometimes she asked for specific images (like William and Kain) and sometimes she let us riff a bit. This woman is one of those riffs. I created her to be someone he was fond of. In my mind she was a lost love, perhaps a powerful sorceress. It was always my hope that someone would write a good story for her after Defiance ended. Maybe one of the fans could? If it's engaging, I could draw an illustration for it. What do you think, would someone be up for it? (But it would have to be a good story.. no furries.. please.. God.. )"[3]

Cabuco subsequently expounded on his interpretation of the woman: "I always thought of her as a human who was a powerful sorceress.. Maybe when he was human himself. I didn't spell out the tragedy that befell her, but did want it to reflect on the reason Vorador is a little more cynical and hedonistic". He said that "it speaks volumes about him without spelling everything out... which is part of the charm of this whole game series".[4]