Weapons are tools intended to inflict damage or harm upon other living creatures. A recurring feature within the Legacy of Kain series, weapons were typically treated as an equipment-type and used to aid combat effectiveness. Many diverse types of weapon have been observed throughout the series, gained from a variety of places and with widely differing usage, speed and power attributes.

The Legacy of Kain series has featured a wide variety of weaponry and armaments that could be gained and used against enemies in combat. Primarily each game featured several main weapon types that could be wielded by the protagonist character, with each of these weapon types bearing differing attributes. The iconic Soul Reaver blade is the most significant of these weapons, making appearances in all Legacy of Kain titles and integral to the plot of the series as a whole.

Kain armed with the Iron Sword in Blood Omen

Blood Omen: Legacy of Kain featured five weapons that Kain could use in his quest. Initially Kain was armed with the all-round Iron Sword and could gain the Spiked Mace, the Axes, the Flame Sword and the Soul Reaver at various 'dungeon' areas throughout Nosgoth, with each weapon select-able at any time once they had initially been gained.

Each weapon in Blood Omen had their own strengths and weaknesses as well as their own unique attributes, with some weapons also having notable effects on move-sets. Generally weapons could be obviously divided by their visible weapon classes, but were also classified as one and two-handed weapons - with the two-handed weapons the Soul Reaver and the Axes preventing Kain from using Spells or Battle artifacts.[BO1][1][2][3]

Vorador wielding the his Hybrid Sword in Blood Omen

Many enemies in Blood Omen were armed with weapons of their own and a wide variety of weaponry was seen in the hands of enemy characters, but these were not possible to be gained or used by Kain himself. The most notable of these unusable objects were Moebius's Staff, Vorador's Hybrid Sword and the Pike wielded by Malek[BO1] - all of which would feature in further Legacy of Kain titles, albeit in redesigned forms.

One weapon is known to have been cut from Blood Omen, with the planned Bone Sword (companion to the Bone Armor) deleted, though part of the sword remains in-game as Vorador's Hybrid Sword is comprised of hilt of the deleted Bone Sword combined with a shorter Soul Reaver blade.[BO1][4][5] 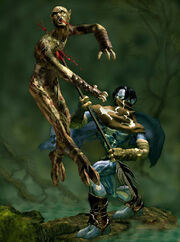 Raziel impaling a Melchahim Vampire with a Stave weapon

Legacy of Kain: Soul Reaver featured a greater amount of usable weaponry, although many were variants on a similar theme with the individual variant weapons having no difference in terms of power, range or move-sets. Initially Raziel was armed only with his innate Claws but he could pick up and use a single object at a time as a standard weapon; these were plentiful in many locations and they could be dropped or exchanged at will. Generally the standard weapons in Soul Reaver could be divided into several classes according to use - Blunt and Projectile weapons, Stick weapons which were flammable and Stave weapons which could be used to fatally impale an enemy.[SR1][6][7][8]

In the course of the story Raziel would encounter Kain and the Soul Reaver, gaining his own Wraith Blade incarnation of the sword as a result of the encounter - a powerful weapon that was ever-present in the Spectral Realm, but only capable of manifesting in the Material Realm when Raziel's Health coil was full.[SR1-C4] In addition, Raziel could gain a single Wraith Blade enhancement - The Fire Reaver.[9] 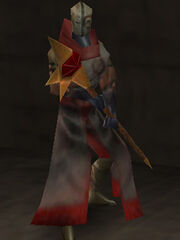 A Vampire-worshipping Novitiate armed with a Novitiate Staff

The relatively few weapons that are used by Vampire hunter and Vampire worshipper enemies - Crossbows, Flamethrowers, Knives and Novitiate Staffs could not be used by Raziel,[SR1] though some were apparently usable in earlier versions.[10] Moebius's Staff also made a reappearance.[SR1-10]

In addition to the unusable weapons Soul Reaver was also planned to feature many other Wraith Blade enhancements besides the Fire Reaver - with the Sound Reaver, Spirit Reaver, Stone Reaver, Sunlight Reaver and Water Reaver intended to have been gained from cut Reaver forges[11][12] and the Ariel Reaver and Amplified Reaver to be gained from the deaths of Ariel and Kain respectively.[13][14] These aspects were cut due to time constraints. 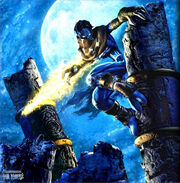 Soul Reaver 2 again featured a variety of usable weapons divisible into similar weapon classes. Initially, Raziel would be armed with his Claws and the Wraith Blade, though at any time Raziel could pick up and wield a single standard weapon object, which could be found regularly in many locations around Nosgoth and in the hands of enemies. Once picked up, the weapon was used until consciously dropped or exchanged, with all weapons capable of fatally wounding enemies. Standard weapons could be split into classes on the basis of use, with variant weapons in the same class having similar or identical attributes. Generally, two-handed weapons were slower and more powerful than one-handed weapons, with the variant classes (Claws, Torches, Swords, Tridents/Halberds and Axes) tending to be ranked in term of power against speed, though range attributes could vary.[SR2][15][16]

In the course of the story, the Wraith Blade would take on a greater significance to the story, though it initially had much of its former frailties and could only be used in the Material Realm when Raziel was at full strength. After meeting its former self, the Wraith Blade was able to be summoned at will, with its power increasing with each strike, until it turned upon Raziel and drained his health.[SR1-C1] Throughout Nosgoth, Raziel could find several forges, from which he was able to gain specific temporary wraith blade enhancements (Dark, Light, Air and Fire), which each had several special abilities and could be re-imbued at numerous Reaver fonts.[SR2][15][16] Additionally, the physical Reaver blade itself was featured on several occasions and was vital to the plot, but could not be wielded as a weapon until the final stages of the game, where its powers made Raziel invincible and unable to drop the blade, leading to the conclusion of Soul Reaver 2.[SR2-C9][SR2-C10]

Malek armed with a Pike and Moebius with his staff

Several of the weapons in the game were not usable by Raziel and chief among these was the Soul devouring incarnation of the Soul Reaver itself. The blade which was integral to the story and could be observed on several occasions in cutscenes[SR2-C1][SR2-C5] was not utilized as a weapon, unlike the other incarnations of the Soul Reaver ('the Reaver' and 'the Wraith Blade'). The ranged Hand cannons used by the Vampire and Demon hunter cannoneers could also not be picked up or used in any fashion.[SR2] Other notable unusable weapon objects included Moebius's Staff; which debuted new vampire-paralyzing powers,[SR2-C1][SR2-C9] whilst the Pikes wielded by several Sarafan warrior inquisitors (including Malek) were unusable in regular gameplay, but could be accessed through other methods.[SR2-C9]

As with Legacy of Kain: Soul Reaver, Soul Reaver 2 was intended to feature several additional wraith blade enhancements - the Water Reaver, Earth Reaver and Spirit Reaver (along with several other Reaver augmentations) - which were intended to be gained from distinct Reaver forges, however due to time constraints, the enhancements and their associated forges (along with all of the augmentations) were removed.[17][18][19]

Kain threatens a Sarafan Guard with the Soul Reaver

Blood Omen 2 also featured a variety of different weapon classes, though there were less appreciable attribute differences between similar weapons. Initially, Kain was armed with his innate Claws but throughout the game he could gain many other weapons, found on the floors of certain levels and in the hands of enemy classes. Once picked up, a single weapon would be used until exchanged for another or worn and broken - with all weapons capable of fatally wounding an enemy. Weapons in Blood Omen 2 were based on several similar weapon 'classes' (Clubs, Swords and Axes), with the weapons that Kain employed effectively determining the 'moveset' that Kain employed against enemies in combat - with similar weapons often having the same or similar movesets and several 'heavy' weapons (the Long axes, Broadswords and Soul Reaver) also able to instantly kill enemies with a single grab attack.[BO2][20][21][22]

Kain was able to enhance Weapon power by opening Weapon power chests, which temporarily increased the damage dealt by Kain's equipped weapon. The powerful Soul Reaver blade was also featured throughout the story, but was only usable in the final boss battle, though it could be unlocked and used earlier through other methods.[BO2][20][21][22] 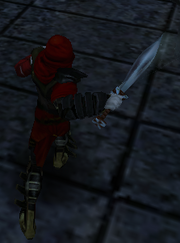 As with previous titles, the ranged weapons of many enemy classes (including the Throwing knives used by Smugglers, Crossbows used by Sarafan Archers and Thieves, and the Firebombs used by Faustus in his boss battle) could not be picked up and used by Kain.[BO2] In addition, Moebius's Staff was depicted in the Eternal Prison as part of a large statue of Moebius which was vital to defeating Magnus in his boss battle.[BO2-C8]

One weapon which is believed to have been removed from access in Blood Omen 2 is the Leaf-bladed sword, which can be found within the game, but not reached through normal means and not tested in combat. Visual and debug clues suggest that the blade was another sword variant weapon and likely had similar moves to other sword weapons.[23] 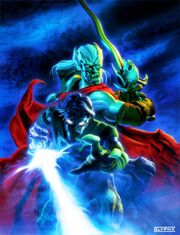 Kain and Raziel armed with their respective versions of the Reaver

Legacy of Kain: Defiance featured a much more limited weapon selection, with Kain and Raziel armed only with their innate weapons - the Reaver and Wraith Blade respectively (with Raziel's Wraith blade encompassing the default Spectral and Material Reavers). Through the game, Kain and Raziel could each gain various enhancements for their weapons - with Kain gaining enhancements from finding fragments of the Balance Emblem (for the Balance, Flame, Dimension, Lightning and Time enhancements); and with Raziel gaining his wraith blade enhancements from Reaver forges within the Vampire Citadel (for the Dark, Light, Fire, Air, Water, Earth and Spirit Reaver enhancements). Each enhancement had varying attributes and special abilities and once gained they could be selected at will.[DEF][24][25] In the final stages of the game the other incarnation of the Reaver (the Soul Reaver blade) was created by absorbing Raziel's soul and gaining his Soul devouring ability - and this weapon would be utilized by Kain in his final battle against the Elder God.[DEF-C13]

With the Reavers and their enhancements as the only weapons used by the protagonists, enemy weapons were once again unobtainable, however several 'decorative' weapons could be gained as puzzle items but not used in a combat (including the Decorative Sword, Malek's Shield, Malek's Sword, the Ornamental Shield - as well as the Blood Drinker, Heart Seeker and Soul Stealer spears). Other notable unusable weapons included the return of Moebius's Staff and Vorador's Hybrid Sword.[DEF]

Several weapons and enhancements were cut from Defiance - with Raziel originally intended to have a shield to aid combat;[26] and Kain originally intended to gain four more Pillars-based Balance emblem enhancements with their own unique attributes and abilities (the Death, Mind, Nature and States Reaver enhancements) - these were removed early in the design process of the game and their specifics are not known.[27] An Unused artifact, bearing a shield-like design is present in the debug Artifact 1a room, but seems to be listed as a puzzle item.[26][28]