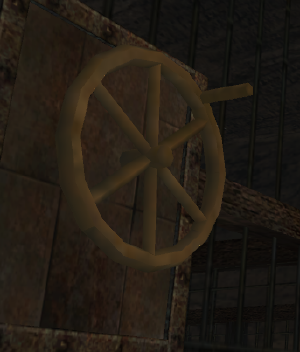 A Wheel in Blood Omen 2

Wheels, also known as Valves, Cranks or Wheel Switches, were a type of switch mechanism that was activated by rotating a wheel or turning a circular dial. They were broadly similar to regular switches, usually activating on/off or open/close mechanisms, although they often required a number of turns to activate. Wheels were seen in various forms in Legacy of Kain: Soul Reaver, Soul Reaver 2 and Blood Omen 2.

Wheels were a variant of switch mechanism. Like other switches they worked by switching a mechanism between two states - usually on/off or open/close - although on occasion they could not be switched back. Unlike other switches the activation of the mechanism was achieved by turning a wheel until it reached a set point. Wheels were typically circular in shape and set vertically against a wall or other barrier. Several designs were seen, with variants on size, material, construction and the usage of handles.[SR1][SR2][BO2] 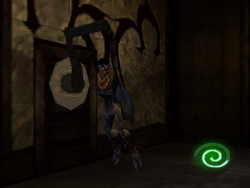 The first wheel variants to be encountered were the large handled "Crank" variants - these were first encountered in Legacy of Kain: Soul Reaver in Necropolis (chapter) as Raziel investigated the Necropolis searching for Melchiah and encountered a large 'crank'-style wheel lever in a room with a large geared mechanism. Turning the crank engaged the gears of the mechanism, making them spin and activating a mechanism which dropped the floor in the room above, ultimately allowing him to reach Melchiah's lair, where a similar crank mechanism allowed him to lower a large meat grinder onto Melchiah to kill him.[SR1][SR1-C4] Later cranks mechanisms were found in the Silenced Cathedral, Fire Glyph altar, Lighthouse and the Ruined City.[SR1][SR1-C6][SR1-C9] If not engaged properly in time, crank mechanisms would 'click' and rotate back to their original position.[SR1]

A second wheel variant were the smaller circular "Valves" - these consisted of a much smaller hexagonal plate which Raziel rotated with both hands. The first valves were located in Legacy of Kain: Soul Reaver as Raziel explored the Silenced Cathedral in The Silenced Cathedral (chapter), with activation mechanisms usually relating to air or gas flow and piping, like opening valves.[SR1][SR1-C6] Later valve mechanisms were found in the Human Citadel and the Ruined City - with one notably used by Raziel to activate the Furnace to kill Dumah.[SR1][SR1-C9] Particularly in the cathedral area these wheels were incredibly fragile, usually shattering after the first use and 'jamming' them open - the valves in other areas could be reused, although they would often be stuck in position, or would only be active for a short period before automatically shutting off.[SR1][SR1-C6][SR1-C9]

Soul Reaver 2 featured only one wheel variant, but this was by far the largest hand-moved wheel seen in the series. Easily twice he height of Raziel, the massive wheel was pivoted at ground level but extended some way beneath and was tipped by a number of prong-like handles which allowed the large construction to be rotated by hand. The wheel was mounted in a small construction on the inner Great Southern Lake and nearby the Sarafan Stronghold and when activated it opened and closed the underwater passage between the 'inner' and 'outer' lake areas. The wheel was first used by Raziel to escape the stronghold area in A Reaver in Time - he would return though the passage at the end of Through the Swamp as he travelled to the Light forge and could use the wheel again after leaving the Light forge in The Light Forge (chapter). With the inner lake area blocked off in later time periods, the large wheel was not seen again.[SR2][SR2-C1][SR2-C3][SR2-C4]

Blood Omen 2 featured the return of wheels to a smaller and more numerous switch element, where they were now metallic and featured a design consisting of an outer circle with several 'spokes' extending from the pivot and a small handle on the outer circle. At least two variants were seen here with larger wheels usually controlling gates or water which required Kain to constantly turn the handle (achieved by holding or tapping the action button rather than pressing it) to slowly raise gates or activate objects, some of the mechanisms would click into place and hold the mechanism in the new state, though often these would be given a short timer before it returned to a deactivated state. These wheels were seen from Creatures of the Night onwards.[BO2][BO2-C2] 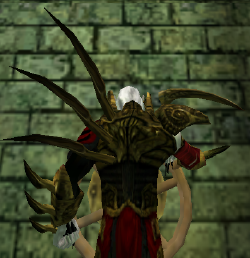 Another variant seen in Blood Omen 2 were much smaller and were activated by a single hand - these typically were related to the Glyph magic network and acted like the valves of Soul Reaver except opening and closing the flow of glyph energy instead of air or gas. These valves could be rotated to open the flow from a glyph source such as a glyph box, switch the glyph flow between two different 'wires' and even to bridge small gaps in the network (which presumably acted like fuses). These valves were seen from Welcome to Meridian onward but were usually found in later chapters.[BO2][BO2-C1]

At least two of the larger crank-style wheels were late additions to Legacy of Kain: Soul Reaver, both bearing different types of switch mechanism in early beta versions. The crank in Melchiah's lair is initially featured as an ordinary lever, whereas the crank in the bell corridor of the Silenced Cathedral originally featured an ornate variant of pressure pad. A crank is still found in the Fire Glyph altar area in the early beta, clearly indicating that the crank mechanism had been designed and presumably suggesting that the others were either yet to be implemented or were initially planned as other mechanisms and changed because the original mechanism was unsuited to the task.[1][SR1]

Alongside the functions of the wheel mechanisms, wheels also have a lot of symbolic meaning within the series. Mirroring the real-life symbolism of the wheel, wheel imagery and metaphor is often used to signify cyclical or repetitive fate or destiny.[2]Most notably these concepts are directly implied in the naming of the Wheel of Fate which includes a repetitive reincarnation cycle[SR1][SR2][DEF] - and this is similarly name-checked in the item the Wheel of Life which apparently is representative of it.[DEF-C7] Other imagery included in the series which derives mythologically from wheel concepts include the many deaths and resurrections of Raziel[SR1-C1][SR1-C7][SR2-C10] (which may apply to a certain extent to all Vampires), Raziel's circular destiny with regard to both his former self and the Wraith Blade,[SR2-C10][DEF-C13] Ouroboros symbols and the Golden Ouroboros[SR2][DEF][DEF-C12][3], Shifting and the Ying/Yang style symbol of the Shift Glyph,[SR1][SR2][DEF] and the Spirit element.[DEF-C12]