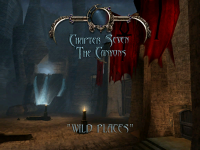 Chapter 7: The Canyons: Wild Places is the seventh chapter of Blood Omen 2 . It followed Kain's journey into the Canyons to find the Seer and find out information regarding the Device. It was succeeded by Chapter 8: The Eternal Prison.

Learning of the Device from Sebastian in Chapter 6: The Industrial Quarter, but knowing little about it, Vorador sent Kain out of the city of Meridian and into the Canyons to visit the Seer, hoping she would be able to tell them about the Device. Kain used a secret exit to leave Meridian and travelled out into the Canyons. Shortly afterward, overhearing a conversation between a Merchant Trader and a Sarafan Knight, Kain discovered that Canyons were a favoured location of Smugglers who would attack passing traders and steal their supplies, Kain also learned that the Canyons were infested with a much greater threat and that a Sarafan company was being sent out to deal with the cause. He also found that the bridge across the Canyons had fallen, meaning he would have to find an alternative route around the outside of the Canyons.[1]

Passing several gatehouses and the fallen bridge, Kain pressed further into the Canyons. Following several 'trading carts' as they travelled through several caves (some of which were unstable and vulnerable to 'cave-ins'). Fighting off the attacking Smugglers, Kain found his way through a Smuggler's Warehouse and back out into the Canyons, where he discovered the true threat of the infestation; as Lesser demons had attacked and overwhelmed many of the trading caravans, killing Merchants and Sarafan forces alike. Finding a locomotive track, Kain rode the machine to an unnamed industrial settlement, barricaded against Lesser Demon attack, but covered in corpses. Kain was forced to blow up a wall to escape. and soon proceeded passed the other end of the fallen bridge and a nearby Sarafan garrison (that was under attack by Lesser Demons) shortly afterward he found the isolated Seer's Cottage, with several Lesser Demon corpses littering the ground outside..

The Seer initially dismissed Kain, but sensing Kain's conviction, she agreed to help him, encouraging him to drink her blood, which granted him the Dark Gift Telekinesis . She pointed out the design of Glyph Seal for Kain, but her Cottage was soon under attack by Sarafan Lord and a troop of Sarafan Archers, whose fire arrows began to burn the cottage to the ground. The Seer rejected Kain's offer of an alliance and instead teleported him inside the enclosure of the Device (as her house burnt, the Seer's fate remained a mystery). Finding himself at the Device, Kain activated the first Glyph Seal on the main door and found that the entire building transformed before his eyes, changing into more threatening 'spiky' architecture. Unfazed, Kain entered the Device and found a monstrous Beast held captive, who recognised Kain. The Beast described how the Sarafan Lord had uncovered the Device, a weapon from eons past - the only way to stop it was to find the creator of the Device, the Builder, who had long been imprisoned in the timeless Eternal Prison . The Beast pointed Kain to a trail that led there[BO2].