"My lupine form enables me to move like lightning and leap over obstacles barring my path. But the guise of the wolf brings with it its own kind of hunger and rage."
―Kain — Listen (file info)

Wolf Form, or Werewolf Form, was a form which enabled its wielders to transform into lupine creatures, sustained by magic energy. The vampires Kain and Vorador utilized it in Blood Omen: Legacy of Kain, where it served as a ubiquitously-used player ability.

On his journey towards Nupraptor's Retreat, Kain began to adapt to his newfound vampire powers. On the trail between the Pillars of Nosgoth and Nachtholm, he found his path blocked by impassable boulders and ridges. In the nearby Wolf Form dungeon, he obtained the ability to shapeshift into the "guise of the wolf" - transforming into a large black-furred, hunched lupine creature - and honed his skills by leaping over several spike pits.[BO1-C3][1] Thus empowered, he was able to progress to Nachtholm, and made frequent use of this ability during the course of his quest when faced with ledges or narrow hazards.[BO1-C3] 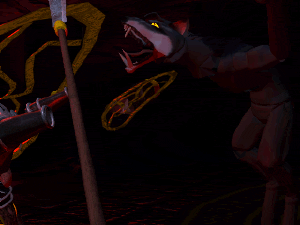 Like his other forms, the use of Wolf Form came at the expense of magic energy. It rendered whatever armor Kain was wearing ineffective, and prevented him from casting spells and wielding battle artifacts.[BO1] In compensation for these hindrances, it provided him the unique ability to jump, and substantially-increased movement speed. He could use his claws to attack enemies at close quarters, and this melee attack was "exceptionally powerful during a full moon".[BO1][2]

When Kain confronted members of the Circle of Nine at Dark Eden, he used Vorador's Signet Ring to summon Vorador, who fought off Malek while he chased down and destroyed Bane and DeJoule. In the ensuing fight, Vorador assumed his own Wolf Form, and successfully overcame Malek by savagely pouncing upon him.[BO1-C7] If Kain chose to explore the Lightning dungeon or the Lost City, he could encounter other creatures who possessed a similar trait - werewolves. These lycanthropes fought him as wolves, but resumed human form when they died.[BO1] This duality, however, seemed to be their natural, inherent state of being, whereas the vampires' Wolf Form was unnatural and magically-adopted.[2][DEF-C12]

Players were unable to use or even witness Kain's Wolf Form when he returned as a controllable character in Blood Omen 2 and Legacy of Kain: Defiance, even though he retained both his Bat Form and Mist Form (dialogue in Blood Omen 2 also implies that he continued to passively employ Beguile during his interactions with humans).[BO2][DEF][BO2-C3][BO2-C6] Crystal Dynamics originally intended for the ability to make a comeback in Legacy of Kain: Defiance, and Daniel Cabuco painted concept art proposals for "Kain's Beast Mode" and "Kain's Dire-Wolf Form".[3][4] The Feral Beast Form entered a planning stage, intended "to bridge the gap between regular kain and his wolf form", but it was ultimately scrapped due to time constraints.[5]