The world map was a gameplay feature in Blood Omen: Legacy of Kain and Soul Reaver 2. It assisted in navigation, offering Kain and Raziel an aerial view of the land of Nosgoth, and the landmarks most pertinent to their respective journeys. A number of other maps of Nosgoth were also present in game or available as supplementary materials throughout the series.

During his travels of Nosgoth as a fledgling in Blood Omen: Legacy of Kain, Kain could call upon the world map for a bird's-eye view of the land. Initially, the map canvas was dim, but regions would become distinctly brighter as Kain explored them. Landmarks such as the Pillars of Nosgoth were identified by text. Usually, the landmark most salient to his current objectives was highlighted with a blue aura. Kain also utilized the world map when determining a destination for his Bat Form flight.[BO1]

After Raziel traveled from the Soul Reaver era to the pre-Blood Omen era, he could similarly consult an overhead map of Nosgoth in Soul Reaver 2 using his ring menu. The world map co-existed on this interface with the ability to shift, and summon or sheathe the Wraith Blade. This variation also highlighted locations of immediate importance to Raziel, and symbolized Reaver forges with the appropriate elemental icons.[SR2]

A number of other maps have appeared in game settings, though these were not selectable and generally appeared as part of environments or cutscenes - thus they were rarely revisited. Blood Omen: Legacy of Kain featured the first of these maps, with two different views of the world - both slightly different from the in game maps - able to be found during the game. Blood Omen 2 also featured its own map of Nosgoth in a cutscene.

The first of these was discovered in Blood Omen in the chapter Defeat Azimuth as Kain explored the Heaven realm of Avernus Cathedral, where several of the floors were decorated with a mural depicitng Nosgoth as if viewed from the sky looking down - even complete with clouds. The map was generally consistent with the in-game and paper maps, although a lot of the world appeared somewhat squashed in comparison.[BO1][BO1-C8]

Another similar map could be found in Stranded in Time as Kain explored the Stronghold of William the Just within the Land of the Nemesis in the Pre-Blood Omen era. Here the map was found in a single chamber, apparently used by William or Moebius to plot the conquest of Nosgoth. The map here was very similar to the 'Heaven Realm' map - depicting an overhead view that was slightly squashed in comparison to the other world maps - although this map was significantly darker and with more 'rocky' than the green coloring on other maps. Several swords are also impaled into the map at important locatons including the Pillars, Stahlberg, Willendorf and the Elzevir's mansion - presumably these relate to Moebius and William's plans.[BO1][BO1-C10]

Blood Omen 2 also featured a map in gameplay, shown at the initial Prologue cutscene, where Kain and Vorador planned the conquest of Nosgoth by Kain's vampire army. The map featured here dealt mainly with south-western Nosgoth and expanded in that direction, introducing the settlements of Freeport, Provance and Meridian and included a new coastline and sea in the southwest.[BO2][BO2-C1]

The spin-off title Nosgoth also featured its own map of the land of Nosgoth in gameplay. This map was found on the floor of a domed building in the southeast of the Sommerdamm level and resembled a bronzed version of the initial 'map of Nosgoth' given for that title (see below) inside a circular patterned border. As with the other initial Nosgoth map, this focused on the area in the southwest of the land.[1]

A slightly different and more detailed version of the Blood Omen map of Nosgoth was also available through other sources. Larger than the original and printed on paper, the additional map was distributed with the Microsoft Windows port of the game and the Official strategy guide. Coming in a number of different sizes, the map extended slightly further and featured some minor changes from the menu selected world map, although it was largely consistent.[BO1][2][3][4]

Another printed map was associated with Blood Omen 2. With the action taking place entirely in and around the complex city of Meridian, a basic map of the city was used as a background illustration in the US version of the Blood Omen 2 manual. Although generally comparable to the layout of the areas in game, the map was notably simplified and was rotated from the traditional orientation of Nosgothic maps - perhaps leading to some of the confusion with directions within the title.[BO2][5][6][7]

No maps exist for the world areas as seen in Legacy of Kain: Soul Reaver and Legacy of Kain: Defiance, although there are numerous fan depictions, attempting to marry the environments of various games to create definitive maps.

In Blood Omen, Soul Reaver and Soul Reaver 2, it is possible to extract the individual room maps from game files - and these could also be arranged to create maps of the areas, although this approach often highlights inconsistencies between the game and real-world geography, with several areas apparently clashing.[BO1][SR1][SR2]

The début of Nosgoth saw a number of supplementary materials supplied through the official website that fleshed out the background of the land of Nosgoth in the mid-Soul Reaver era. Among these was a map of Nosgoth focusing on the southwest (much as Blood Omen 2 had done) - where its first four playable areas were based. Later updates also included overhead area maps in the style of those extracted from previous games.[1][8]

The land of Nosgoth and its geography were originally conceived by Silicon Knights' Denis Dyack and Ken McCulloch; McCulloch in particular was cited as the creator of "detailed mythologies in the world of Nosgoth".[9] The setting was originally intended to serve as the game world for an initial concept named The Pillars of Nosgoth, which was sent to Crystal Dynamics and accepted for production with the help of Lyle Hall.[DEF][10][9][9][11] The Pillars of Nosgoth was internally referred to as Dyack's "vampire project", evincing that vampires were intended to serve as a central element of the games' mythology from the outset.[11] Early influences in Nosgoth's development included The Wheel of Time and Necroscope - the Pillars of Nosgoth specifically were inspired by cover art from The Pillars of the Earth.[9] 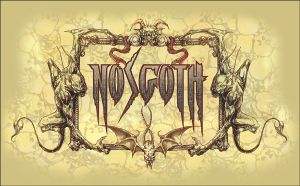 Nosgoth banner from atop the Blood Omen printed map

Beyond its obvious nature as a fictional land, it is (deliberately) never explained what Nosgoth actually is.[12][13] Formally, it should always be referred to as the Land of Nosgoth.[12] The breadth of territory referred to under its name (including several entities that may be considered sovereign states) could suggest that Nosgoth is a continent, but it has also been indicated that it is a world or planet.[SR2][SR1][DEF][BO2][BO1]

As no game has ever gone beyond the bounds of Nosgoth, and no references have been made of lands outside of it, some have speculated that it may indeed comprise an entire world, or may be a Pangaea-like supercontinent. Thus far, all maps depicting Nosgoth have presented it at a large expanse of land, with the only known ocean on the south and west.[SR2][SR1][DEF][BO2][BO1]

Nosgoth is a vast realm with a diverse landscape, including mountains, forests, plains and swamps, but very little non-polar desertification. Real-world seasons such as winter are mentioned, and the land appears to have a temperate climate, similar to that of northern central Europe.[SR2][SR1][DEF][BO2][BO1][14]

Crystal Dynamics did not implement the World map or Compass features in Soul Reaver 2 until some time after May 2000. Amy Hennig mentioned in an interview that it was introduced as a player aid, in response to criticism of Legacy of Kain: Soul Reaver that determining directions within the game world was difficult. She said:

"we knew it was a problem, and it was just one of those things that just in the rush, we really have to get it out, we just said that's unfortunate, but there's nothing we can do about it. It's too big of a problem. [...] Well, what we're going to do is, we haven't done it yet, but we're going to put a compass on the screen. We've talked a lot about having a map at this point, an in-game map, a living map that shows your progress and stuff. At this point, though, I think we won't do that. Just because it's a lot of work for the programmers and the artists to do that, keep it up and make sure that it's right and I'd rather spend that time on the game itself and not a map that you open sometimes."
―Amy Hennig[15][16]

Although Hennig was reluctant to include a map in the game and voiced her preference to package a printed map with the game or within the manual,[15][16] the proposed Soul Reaver 2 printed map ultimately did not come into fruition as artist Daniel Cabuco was able to create a version for the game, adapting and redrawing from the printed Blood Omen map to fit both the world seen in Blood Omen and the game world of Soul Reaver 2.[SR2][17] Cabuco commented:

"The overall locations were laid out on paper and I added symbolic (non scale) elements to signify areas like swamps, mountains, valleys, etc. It was pretty much done as the game descriptions came in for each area. I had to rectify the game areas with the Blood Omen map to try and preserve both. Wasn't easy when there was discrepancy, but hey, who's gonna sit there and look at every little detail, right? (Of course LoK fans would)."
―Daniel Cabuco[17]

The redesigned World map ultimately was not completed in time for the issuing of the Air Forge demo, and the icon is missing from the Ring menu in the demo. A placeholder dot is present in its position, suggesting that the map had been decided upon but was incomplete or the icon was yet to be designed at that time.[18][19]

Blood Omen 2 developers also considered the map of Nosgoth when choosing the locations for that game and seeking "to create some fairly new locations that fit better with [their] needs", the developers "elected to move down the map of Nosgoth into some unexplored areas in the southern regions"; a map of this south-western region of the land can be briefly seen in the Blood Omen 2 introductory cinematic.[BO2][20]