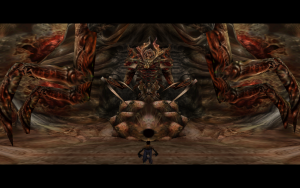 Zephon´s lair is located near the top of the Silenced Cathedral. It is the highest location Raziel can reach in Legacy of Kain: Soul Reaver.

At some point in time Zephon and his clan assaulted the Silenced Cathedral, successfully taking it over from the human´s hands. Nestled safely in its furthermost chamber, Zephon had attached himself to the walls of the room after transforming, covering the walls with his flesh and essentially becoming one with the room. Since rendered immobile, it seems that he had to be fed human sacrifices which his soldiers would put into pods on the side walls. Much like a spider, he probably siphoned their blood to sustain himself over time.

It also seems that the humans tried to assassinate Zephon at one point in time as there is a body of a vampire hunter found at the entrance.

During development of Legacy of Kain: Soul Reaver, the room has undergone minor changes. Both beta builds feature two sidechambers which contain a soul dispenser, active only in the Spectral Realm. In order to use it, Raziel has to switch to the Spectral Realm and phase through the thin membrane of the sidechamber.

Once inside, the soul spawner will keep spawning new souls if Raziel decides to devour them. However, this comes at a risk - Zephon will attempt to strike Raziel down with his remote claw in the ground which takes almost all of Raziel´s spectral health if hit by it. This attack and his brief manifestations in the Spectral Realm might hint that Zephon is aware of the Spectral Realm and can reside in it temporarily.

Ultimately, these sidechambers were probably deemed unnecessary since Raziel can always replenish his health by devouring the vampire wraiths in the central chambers. The sidechamber entrances have been blocked off and the sidechambers themselves consequently deleted from the level in the final release of the game.