The Zephonim are a clan of vampires in Legacy of Kain: Soul Reaver. They are the descendants of the lieutenant Zephon.

The primary territory of the Zephonim is the Silenced Cathedral, and they are encountered exclusively in and around it.

As with all the clans seen in Legacy of Kain: Soul Reaver, the Zephonim are split into two distinct active types: the older, stronger and more evolved adult Zephonim, and the younger, weaker and less evolved fledgling Zephonim. They are also encountered in their inactive pupating state.[1][2]

As a clan, they were exclusive to employ Vampire Worshippers around themselves as servants or guards. Zephonim (and their master) somehow evolved to showcase arachnoid traits. They all have long thin clunky but lethal limbs, which they can use to a variety of advantages. First of all, their most prominent aspect is their ability to climb walls. This makes them well equipped to follow prey over vertical surfaces. Strangely they preferred doing it backwards, facing away from the wall.  Later, in Soul Reaver 2, it is seen that when Raziel uses his claw to climb, or to notably hang onto a surface in wind, he uses his acquired wall climbing ability which he got by literally sticking and sinking his long nail-like claws into suitable stone surfaces where he can hang onto.

The other prominent thing about them is their visual appearance, and stance. All individuals keep and make use of their humanoid trousers, but sport a bare chest.  They are skinny, pale, with rather elongated heads and prominent teeth. They are frequent users of their teeth in battle, biting their foes, just like the Rahabim.  They also can choose between bipedal and quadruped locomotion at will.  (Later, a highly devolved Turel, a completely different separate lieutenant needed to fully use four limbs for walking.)

They are among those who present the fastest fighting movements in game, relatively on par with the Turelim.  In game, they did not showcase any means of ranged attacks, they and the Dumahim were the only two clans who absolutely needed to move to the location of the prey on foot when it was distant. (But then again, Zephonim had their wall walking ability.) In some rare occasions, they took upon some opportunities, and jump-ambushed some prey, when they were in a climbing hold and the prey showed up underneath.

They were the only ones who were seen being affected by sounds created with primitive technology made in Nosgoth. Some Cathedral pipes emitted certain sounds that killed a few individuals.

Interestingly, no Zephonim were encountered outside of the main gate of the Silenced Cathedral, this makes them the most secluded clan.

The inner, higher, and more personal reaches of their territory – naturally centered around the stationary clan patriarch – was covered on the walls by a strange fleshy substance that resembled some unusual kind of layer similar to spider webs. These webs helped support placing different things on them, like the following:

It was frighteningly revealed that they frequently cocooned their prey, and hanged them on some walls, ceilings, or stuck them onto the pipes of the cathedral. The player actually sees a room that is suspected to be one of these prey vaults. Another completely different race, the likewise insect-like Lesser Demons also bound humans in threads.  Zephonim pupating was grotesquely witnessed. They sleep in webbed cocoons stuck to walls, placed facing back away from the walls, their faces mostly visible through the tight web, showing occasional grins. They could ambush from this state when awake. It was near impossible to differentiate cocoons bearing sleeping and awake specimens.  Although, to be fair, none of the above two cases were exclusively only on webbed walls.

Another type of incubation has been seen in the Zephonim territories, mostly if not exclusively, in the personal chamber of Zephon. Some walls showed unmistakable forms of humanoids there interred, but it wasn’t clear that if they were vampires or human victims, or something temporarily in-between.

along with clan leader Zephon, two types of Zephonim were seen in game - Fledglings and Adults. A third class - the Deceivers - was playable in Nosgoth representing a stage before the devolution of the clan.

Deceivers were the class of Zephonim encountered in the mid-Soul Reaver era War for Nosgoth seen in Nosgoth.

Fledgling Zephonim are a type of enemy in Legacy of Kain: Soul Reaver. They are vampires and the descendants of the lieutenant Zephon. They are the younger, less evolved members of Zephon's clan, in contrast to adult Zephonim.

They are devastated by sunlight’s touch, even the weaker rays of Nosgoth’s daylight, which is filtered by smoke. Which means, some of them may be executed when thrown into a small area where daylight has broken into, but otherwise know better than to go near it. These young ones look more pale and sleek.

Adult Zephonim are a type of enemy in Legacy of Kain: Soul Reaver. They are vampires and the descendants of the lieutenant Zephon. They are the older, more evolved members of Zephon's clan, in contrast to fledgling Zephonim.

They can walk through areas of Nosgoth’s smoke filtered daylight without danger of being burned. Adults of the clan have red glowing eyes. They appear to have grown some skin flaps on their shoulders, which resemble collars on the sides, these have unclear purpose. They have a clan sigil on their chests. 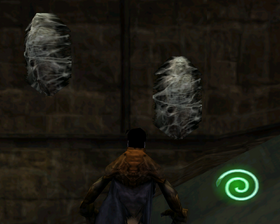