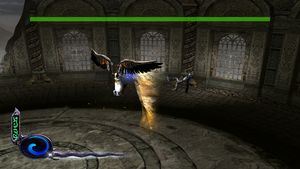 Zephyr's Wind was a wind-based attack used by the Hylden Lord Possessed Janos Audron against Raziel in their battle in Chapter 12 of Legacy of Kain: Defiance.

The attack, which was preceded by an Air Jump, consisted or Janos hovering in mid-air and using his wings to create a tornado-like cyclone which sped towards Raziel and was necessary to quickly dodge.